10 Dark Arabian Legends To Creep You Out 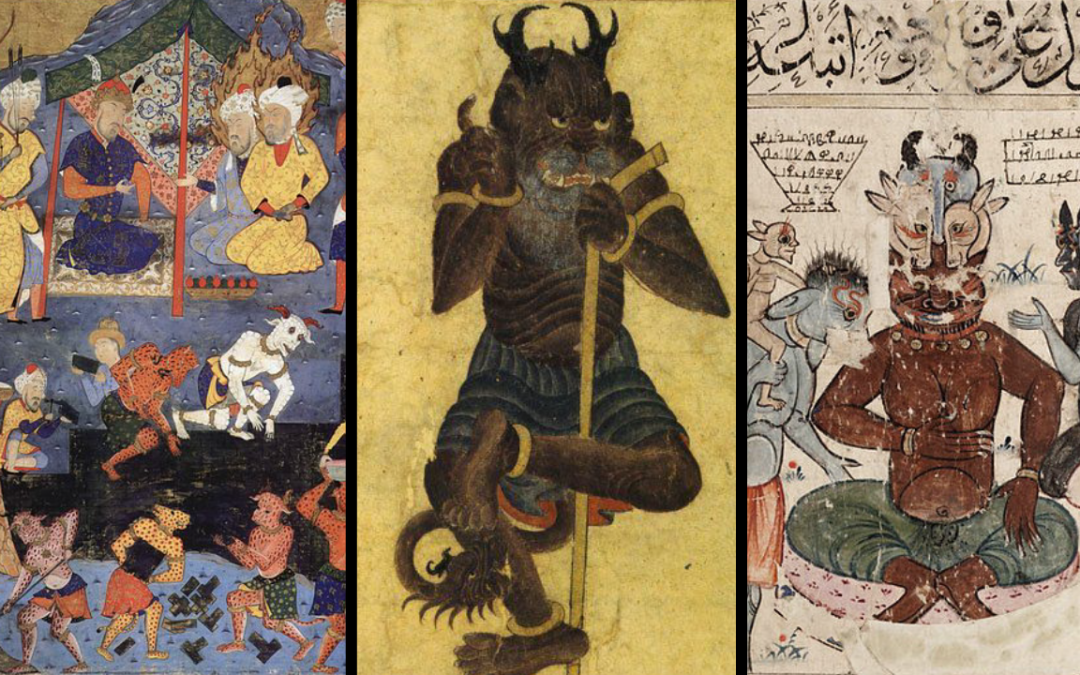 From the land once known as Arabia many stories have emerged. For centuries they flowed out of the middle east, captivating Europe with tales of adventure and exotic creatures. Some were uplifting stories where the hero overcomes great difficulty. An example would be Aladdin, which despite being originally set in China was a thoroughly middle eastern tale. The story of Aladdin has become one of our world’s best known narratives. But there are so many more, lesser known, darker, more disturbing narratives. They describe terrifying monsters and tales of twisted trials. Here are ten dark Arabian legends. 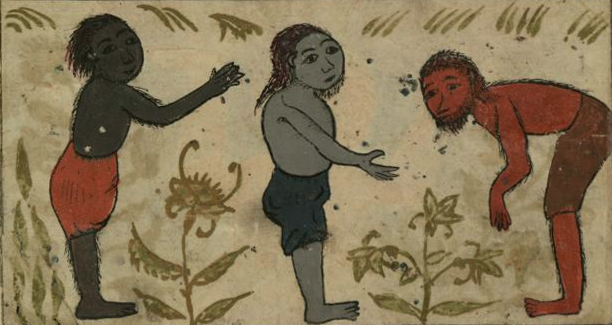 Wandering the wilderness of what we now call Arabia there are monstrous beings known as Nasnas. From a distance the Nasnas appear to be human. But get closer and you will realize they are only half human, as if their bodies have been literally cut in half. They are created when a human mother mares with a demon, being born freakishly deformed. Rejected by society Nasnas are made to wander the world alone, waiting for someone to happen upon them. Despite having just one leg they are surprisingly agile. And with their one hand are easily able to kill any human.

Just one touch from the flesh of a Nasnas and mortals drop dead immediately. And so those who know of them stay clear if anything remotely resembling a half man. Those who don’t are easy prey. Often the Nasnas disguise themselves as beggars or lepers in need of charity. Yet as soon as any human gets close enough, they pounce on their victim. 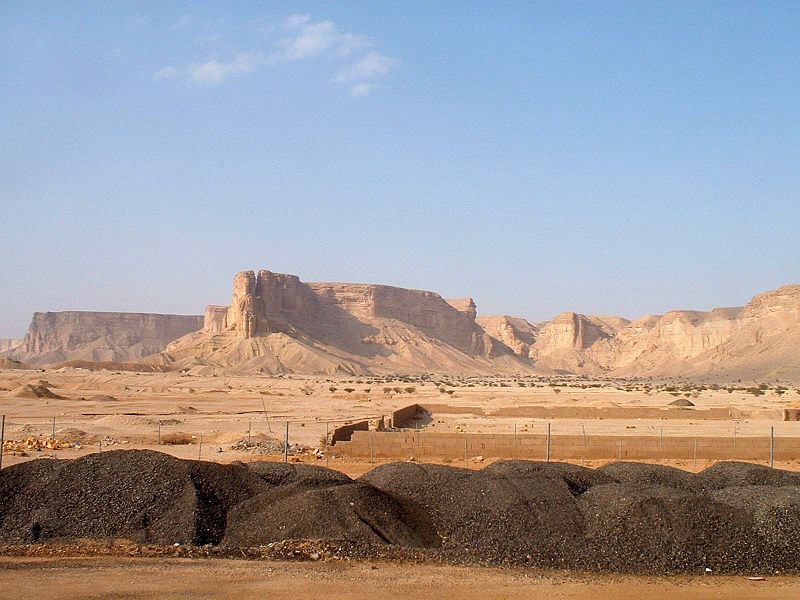 Thousands of years ago there lived a woman with unique eyesight. With unusually bright blue eyes she had the power to see into the future – a power on which her tribe relied. They were a small and remote tribe, constantly under threat of attack by larger tribes. But with her ability to predict enemy movements they were always able to defend themselves. Yet still it was a precarious balance. Before long other tribes learned of her magical eyesight. So they came up with a cunning plan to fool her. Using leaves and branches they disguised themselves and moved incredibly slowly, hoping she would mistake them as trees.

But it didn’t work. She immediately told her tribe that the enemy had disguised themselves as trees and are coming to attack. But no one believed her. Fearing the power of her visions, they thought she had been driven insane, ignoring her prediction for the first time. It was a huge mistake. When the enemy arrived they killed every man they found. Then they turned on the blue eyed woman, blinding her with a knife and massacring the entire tribe. 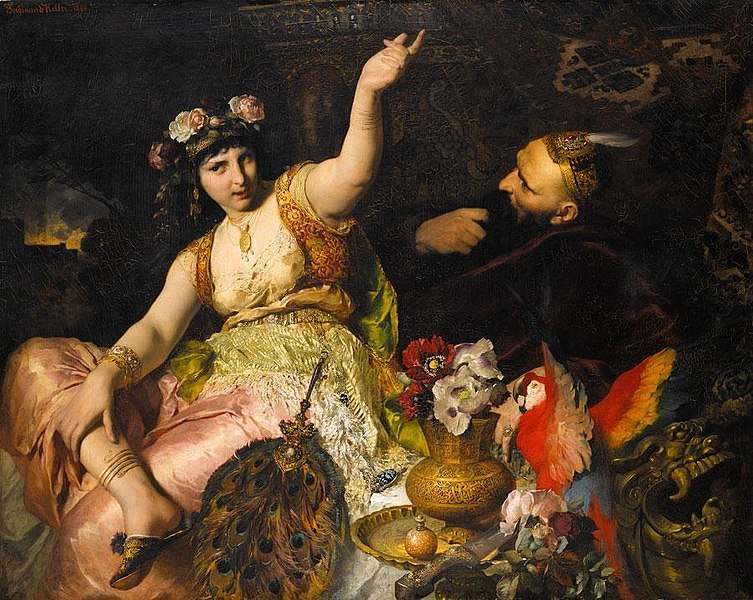 In the ancient world, when Central Asia was ruled by vast empires, there was a king called Shahryar. He was the greatest king of all but a deeply disturbed man. On discovering his wife had been unfaithful he murdered her and grew to hate all women. So he decided to marry as many as possible and murder each of them. One by one he began to marry women, killing them immediately after the wedding night. It wasn’t long before people noticed the tendency of his wives to disappear. Rumor spread of them either being murdered or locked away in some kind of dungeon. Fathers would do almost anything to prevent him marrying their daughter, but few succeeded.

For three years he married over and over, only to kill each of his brides. Then one day someone actually volunteered to marry him. Everyone warned against it but she wasn’t scared because she was a ,aster storyteller. On the night of their wedding she simply told him a story. The story was so long it lasted all night, causing the king to fall asleep before the end. But he wanted to hear the end so he put off killing her for another night. Every night she would begin telling the king a new story, extending her life one day at a time. After 1001 nights of frankly fantastic stories he decided not to harm her. This story was so influential it became the namesake of the thousand and one nights, a famous collection of Arabian legends. 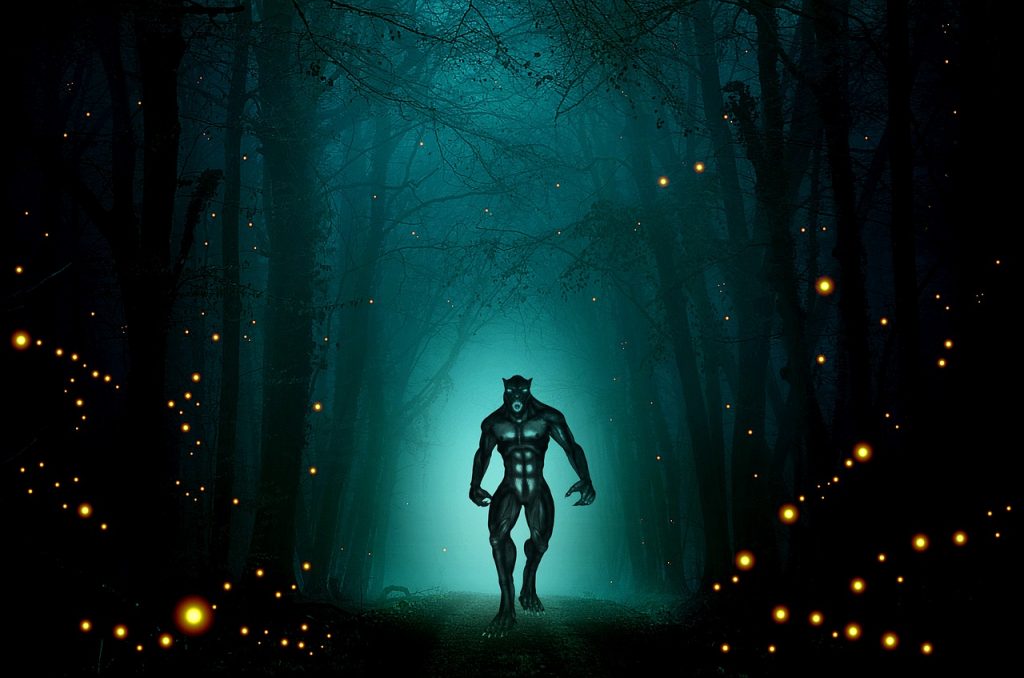 Every region seems to have some kind of werewolf legend. The middle east is no different. Many Arabian legends tell of werewolf that are almost identical to those in Europe. They are humans, who on certain dark nights transform into a world like beast. But instead of then roaming the wilderness for fresh victims to feed on, these beasts satisfy their hunger in a different way. They instead head for cemeteries or tombs, anywhere dead bodies can be found. When there they consume corpses until sunrise, when they retake a human form. Their drive to consume human remains is overwhelming. Anyone foolish enough to interrupt their feasting will themselves soon be dead and consumed by the beast. Little else about them is known. It’s probably best that way.

6: The City of Brass 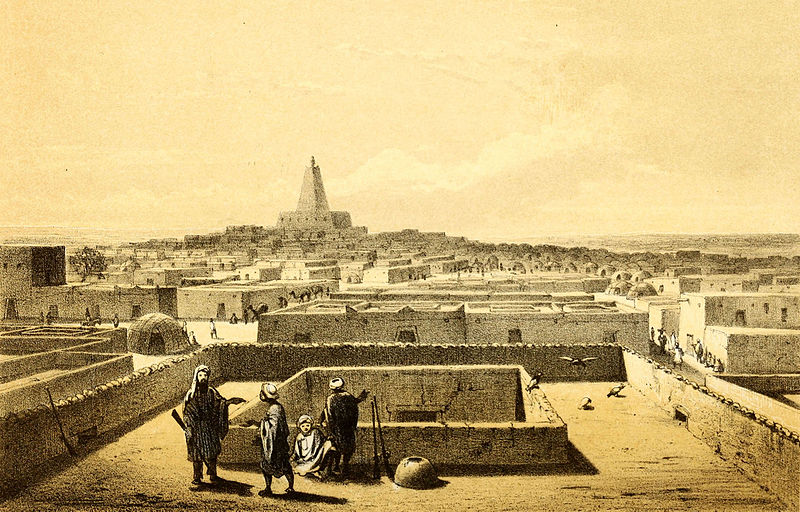 There was once a group of explorers wandering the deserts of Arabia. For years they had been searching for a mysterious lost city – a city few people thought existed. But now they found it, a vast walled city, clearly long abandoned. To their dismay there was no gateway anywhere on the wall and it was covered in tablet warning not to enter. So to get inside they decided to build a ladder and climb over the wall one by one. The expedition leader was the last to climb. On reaching the top he saw his companions dead below him. They had either fallen or jumped from the wall, and now that he was atop it, he felt the strong urge to jump to his death himself. But he was stronger willed than the others and carefully climbed down the other side.

He found the city eerily quiet and a foot deep in sand. The only inhabitants he found were corpses. Long dead skeletons with strangely bright skulls sparkling in the light. In the center of the city he found a great hall filled with more skeletons and vast riches. He saw objects of gold and silver, diamonds and other jewels. It was an immense treasure covered in cobwebs. But the moment he brushed the cobwebs away and went to pick up one of the jewels, the skeletons around him came to life. Surrounded by the undead, he was unable to escape and was torn to pieces. 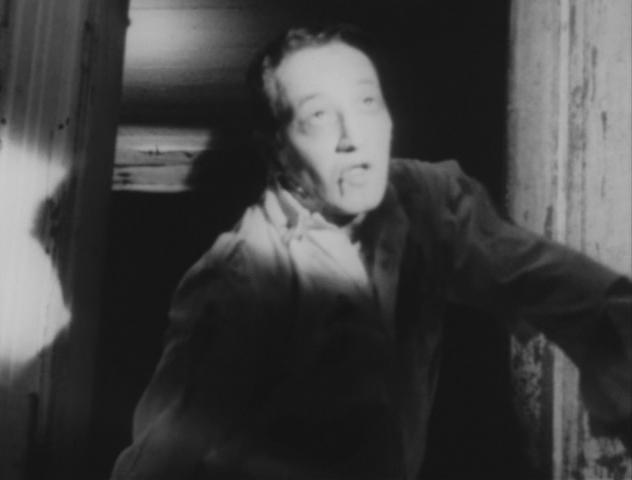 There are countless Arabian legends that tell of beasts known to lurk in cemeteries. Perhaps the most dangerous of all of such beasts are the ghul. Each ghul was once human. Having lived sinful lives and broken blood oaths, they are denied entrance to heaven. Now neither living nor fully dead they grew grossly deformed, both in body and mind. The ghul are driven purely by an instinct to consume human corpses. When at their chosen cemetery the ghul dig up and consume each corpse one by one. Only after there are none left will they abandon it. Try to enter their cemetery and you will pay a heavy price.

Despite having half decayed flesh they are immensely strong and extremely aggressive. Even if you survive the attack, just a bite from the ghul is enough for you to become one yourself. After a very strange death, you too will walk the earth searching for flesh. And as you move through the world, a deadly plague will move with you, filling more cemeteries. 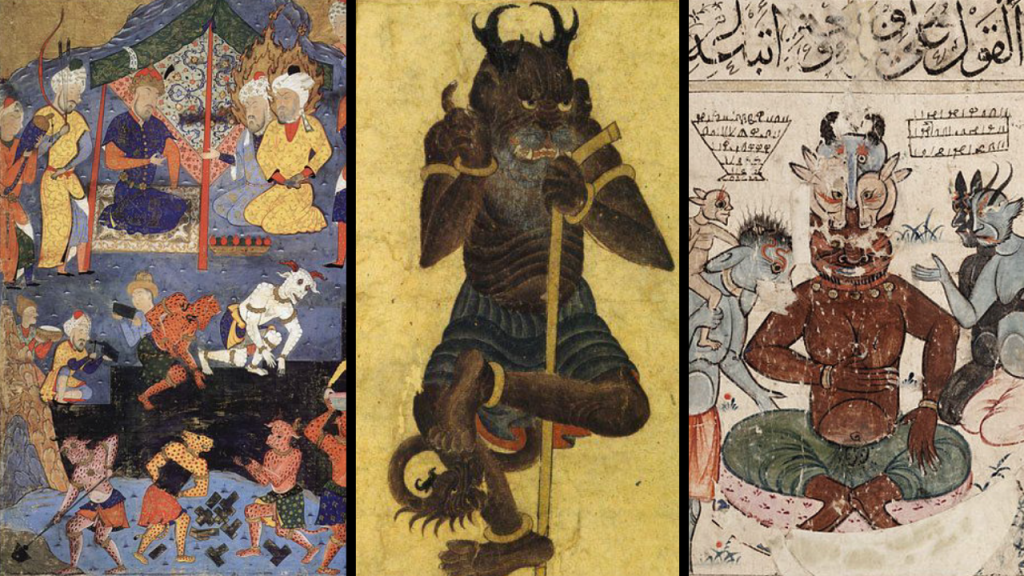 Humans are not the only being to call this world home. Much older than us are Jinn. Often mistaken for demons, the Jinn exist all around us but we cannot see them. They can see us, and have been known to possess humans, causing violent seizures or even death. When possessed by a Jinn it’s common to suddenly be able to speak new languages. But that’s a small consolation. Not all Jinn are equal. Entire societies of Jinn are out there, ordered societies with kinds, laws, and religions. They have free will. A Jinn can be good or evil. They eat, drink, sleep, marry, and even die. But rest assured, they are still very different to us.

Jinn were created long ago from a mysterious smokeless fire. And instead of blood, fire runs through their veins. There are seven great kings of the Jinn, each possessing incredible power. Arabian legends describe all kinds of deeds carried out by such kings and their followers. It’s not unknown for them to kidnap humans to be kept as slaves. But no matter what happens we can only see what they want us to. 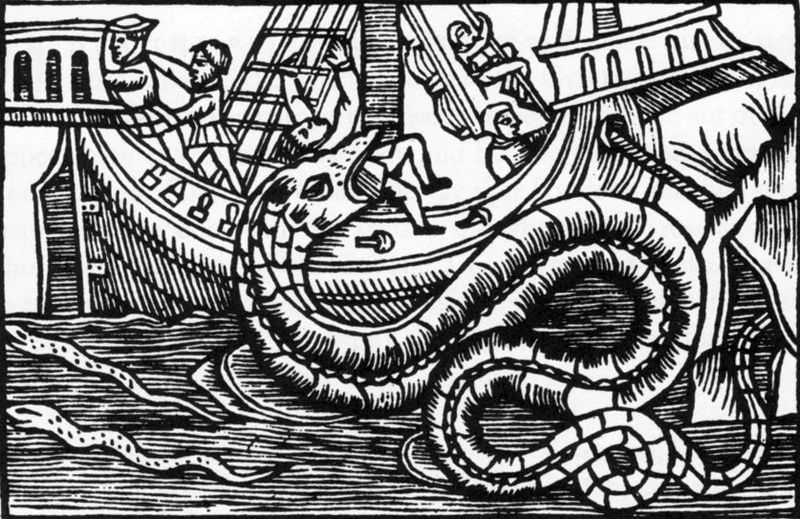 Possibly the strangest of all Arabian legends, this one tells of a mysterious lost island somewhere in the Indian ocean. In the ancient world it’s location was well known to Europeans and middle easterners. Yet few were brave enough to visit. You see, this island was plagued by a monster. A serpent like creature able to breathe fire and swallow grown men whole. For hundreds of years the beast terrorized the inhabitants of this island, emerging unpredictably and dragging victims back below the water. They tried to appease the beast with human sacrifice. But no matter how many corpses they offered, it never grew less destructive.

Often the beast devoured entire farms of livestock along with the farmers themselves. Then one day Alexander the Great landed on the island to rest before moving onward. But the serpent emerged, trapping Alexander and his army. For days he sent troops towards the beast, and watched all of them be eaten alive. Eventually he decided to kill it himself, shooting it through the eye with an arrow. At long last the beast was dead. Consumed with gratitude, locals gifted Alexander a magical horned rabbit. 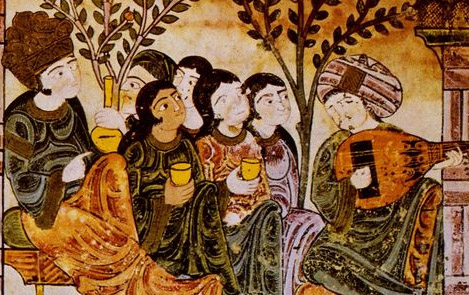 It has long been believed by some in Arabia that every human has a kind of spiritual doppelganger. Almost identical to us, they live in a parallel universe. And despite being a universe away they are connected to us. Like a mirror image they make the opposite choices we do. If we do something good, they do something evil. If we make a shrewd investment, they lose out. So for us to build a good life for ourselves they must suffer. It is always in their interest that we make the wrong choices.

And so, though we cannot see them, they often find ways to influence our choices. Somehow they urge us to make bad decisions, to destroy our lives so that theirs may flourish. So don’t forget: Wherever you go and whatever you do there will always be someone conspiring against you. There are so many more Arabian legends, but for now we will leave it here with the tale of Qareen.