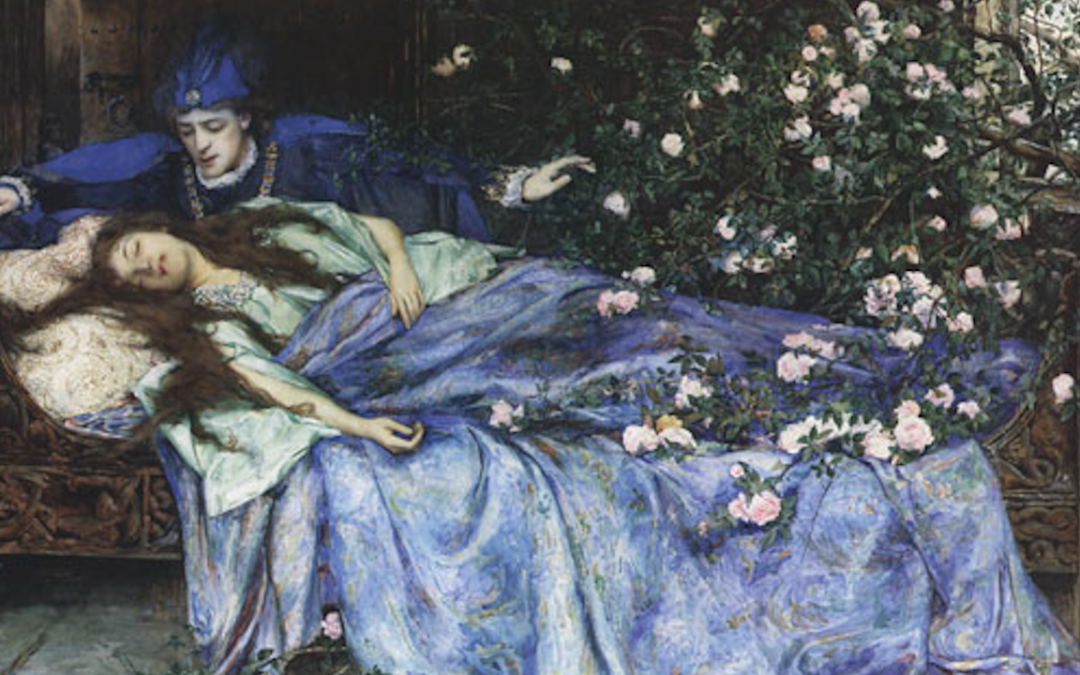 No culture is as fun loving or light hearted as Germany. But there is also a darker side. Thousands of years of division and hardship have left Germany with countless twisted legends. And they’re not all about French people stealing sausages. Many German legends are genuinely disturbing Even traditional fairy tales are thought to often have been inspired by real historical tragedies. The Pied Piper of Hamlin may well have been a real figure who kidnapped an entire village of children. And that’s just a fairy tale. More codified German legends tell of werewolves, vampires, cannibals, and tragic ghost stories. 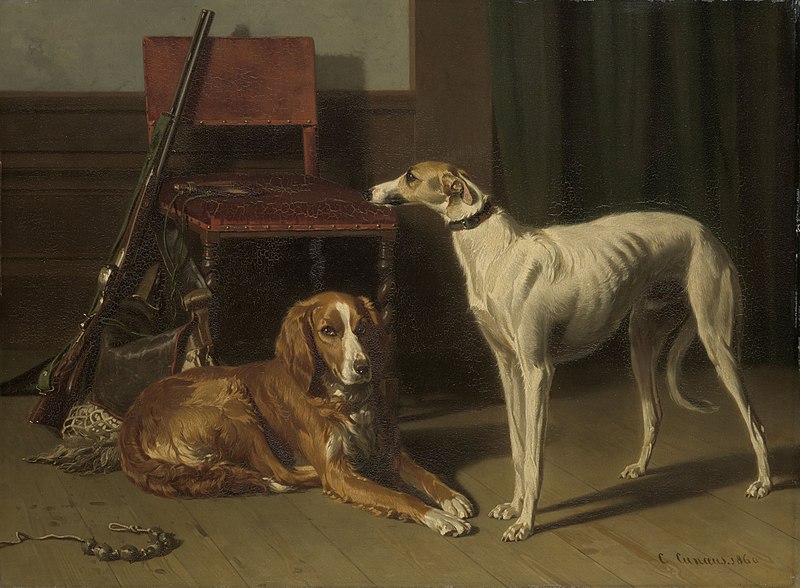 In a remote valley was once a desperate hunter. It had been weeks since he last killed an animal, and he and his wife were in danger of starvation. At this point his rifle was broken. So even when he encountered a boar, he was unable to do anything. But one morning he was approached by a stranger. The stranger was wrapped in a cloak that hid his face, and had an accent he had never heard before. The stranger gave him a gun with seven bullets, telling that it is a gift from a friend. These bullets were special – no other kind would fit the gun. The first six would hit whatever target the hunter wished them to. But the mysterious stranger would decide the target of the seventh.

In time this proved to be true. The hunter was soon providing more than enough meat for his wife and gave much away to the community. Every week he brought home a boar, without needing a second shot. That is, until the 7th week. That Thursday an especially large boar appeared on their property. It was too good an opportunity to miss. So he took aim and fires. He heard the bullet connect and the sound of it’s carcass hitting the ground. But somehow the boar ran away unharmed, leaving no trail of blood. It was only on turning around that the hunter saw his wife on the ground bleeding to death. Some speculate that the stranger was really the devil, a common theme of German legends. 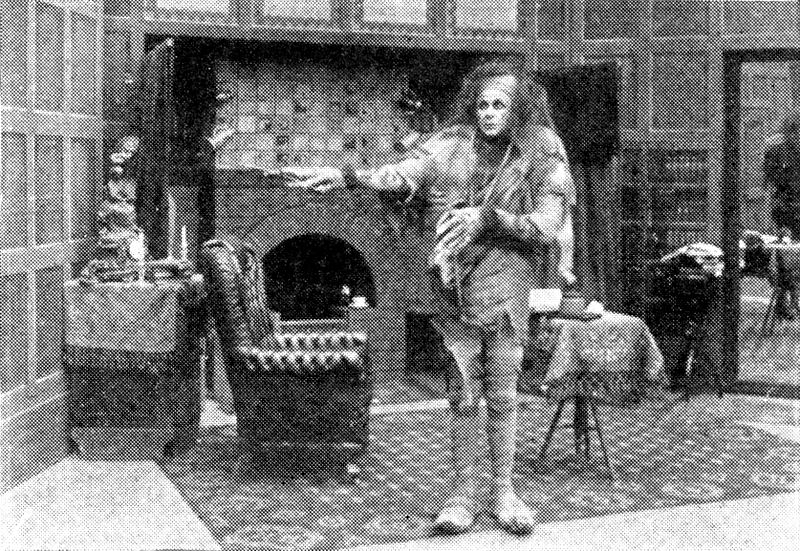 Before writing her seminal Gothic novel Frankenstein, a young Mary Shelley spent much time in Germany. It was here she would learn of legends that chilled her bones. One told of an insane noble, living alone in his remote castle. Behind it’s vast stone walls he practiced alchemy. This man regularly had dead bodies stolen from nearby cemeteries and brought to his castle for strange experiments. By using god knows what in god knows what way he created an elixir of life, a solution that could re-awaken the dead and potentially grant immortality. But it didn’t quite work. The corpses it was applied to would certainly re-animate. But they would be mindless. Zombie-like undead figures with no will or desire or consciousness. It was far from the kind of immortality their creator was hoping to achieve, so he gave up on his dream. Accepting failure, he sent his creations out into the woodland surrounding his castle. Some were torn apart by wolves or simply by the elements. But many are still out there, wandering the black forest.

8: The Girl With No Hands 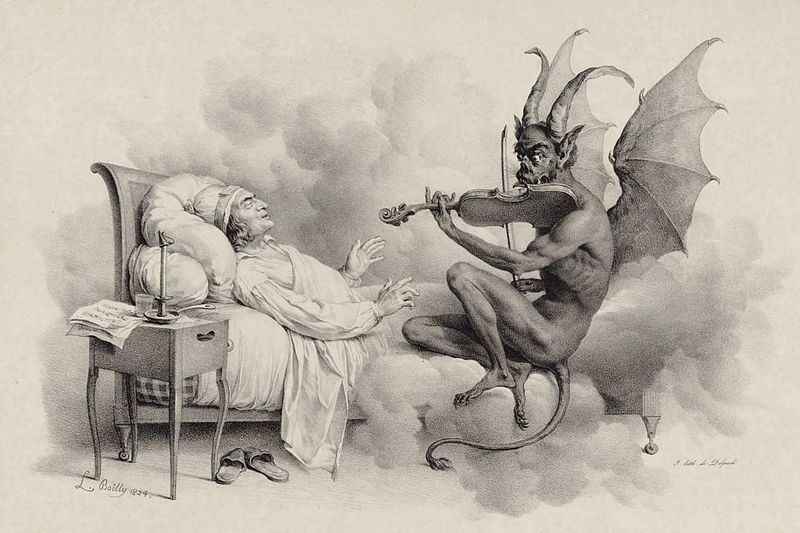 There was once a poor miller, who ran a small grain operation with his young daughter. Year after year they struggled to stay in business, barely making enough to survive. But then one day he was approached by a man he had never seen before. There was something menacing about the man yet he seemed nice enough. In fact he offered the miller a bag of gold. In exchange for it, he asked only for what stood behind the mill. The miller knew an apple tree stood there – a small loss in exchange for that price. Only after accepting the gold did the miller realize his daughter was stood under the apple tree the whole time behind the mill. He had sold her to the stranger.

One week later the strange man reappeared. They now saw him for what he was: the devil. He had come to claim the girl’s soul, as he’d already paid for. But as the girl had commit no deadly sin, he was unable to do so. Enraged, the devil demanded the miller cut off the girl’s arms. Fearing the devil would kill them both, he complied, mutilating his own daughter. And for the rest of her life she was without arms.

In a remote district of Germany can be found the tiny village of Morback. Nothing much happens in Morbach today. But locals tell of a time when people across Europe knew of them. The way they describe it, there was once a notorious werewolf called Johannes Schweitzer. While the Napoleonic wars tore apart Europe, he roamed freely, terrorizing the German countryside as he went. Cursed by god for committing war crimes, he was to live as a monster until his death. For years he seemed unstoppable, but on arriving in Morbach something happened.

Somehow the impoverished locals of this unknown village killed the wolfman – the last of his kind in Europe. To commemorate this a single candle was lit. Strangely, that candle never burned out, not for hundreds of years. It was only in 1988 when that candle finally burned out. Within days new reports emerged of a monstrous creature lurking in the forests. The reports only stopped when a new candle was lit. As that new candle still burns away to this day, it remains one of the most notorious German legends of all. 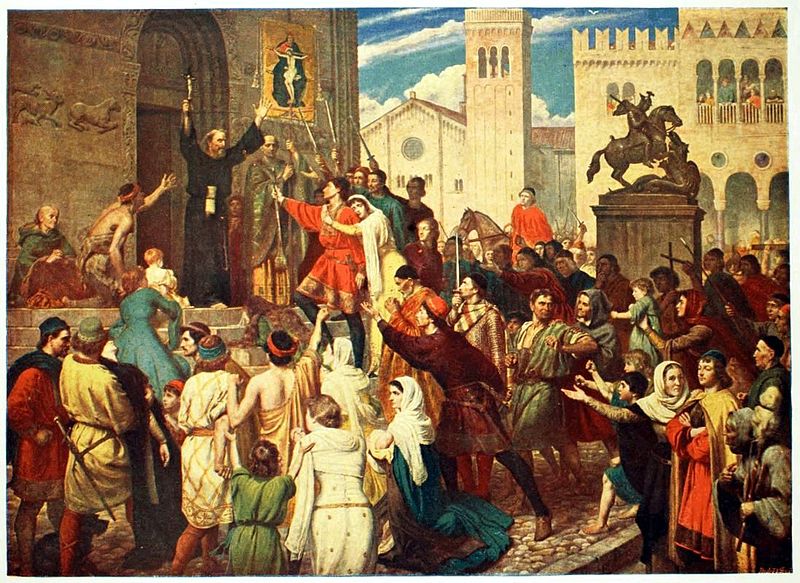 It was the year 1212 AD, the age of crusading. But years before, Jerusalem had fallen to Muslim forces and Christendom as since been desperate to reclaim her. Yet launching a crusade was never an easy fear, and no one had been able to. Then one day, a 12 year old German boy emerged, claiming to have been visited by Jesus himself. Jesus told the boy to personally retake Jerusalem and convert it’s inhabitants to Christianity. He traveled the many German states, proclaiming his divine quest, of how he would lead an army to Jerusalem, retake her through peaceful means, and convert every single Muslim. To ensure it was peaceful the army he gathered was entirely comprised of children.

By the time they set off for the Holy Land he led a force of 30 thousand children. With god as their guide, the children’s crusade marched on Jerusalem, expecting to be greeted as heroes. But to cross the Mediterranean they took on the help of a group of merchants, who promised to transport them for free. It seemed like a gift from god, but not for long. Taking advantage of their naivety, the merchants instead took them to North Africa. There the children were sold into slavery, never to be seen again. It might not seem entirely accurate to include this on a list of German legends. Some consider this to be a true historical event, but that’s highly debatable. 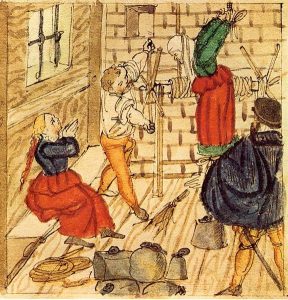 There was once a young woman called Walpurga Hausmannin living in rural Bavaria. Her husband dying young, she was thrown into poverty. This made her easy prey for a male co-worker, who soon seduced her. One night he enticed Walpurga to drink a vast amount of alcohol. The next morning she awoke to find Satan himself standing over her. He revealed that the male co-worker gad really been a demon in disguise, and that last night she had sold her soul. The devil now owned her soul and she had no choice but do whatever he commanded.

In following years she would regularly go out at night to murder children. Every time a corpse was found a trial of blood led away from it. But that time she had killed 41 children, breaking their skills and drinking their blood like a vampire. Indeed, Walpurga Hausmannin is truly among the darkest of German legends. 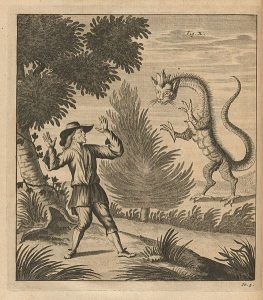 In the Bavarian Alps, small communities have long been plagued by a terrible beast. Like a giant lizard with the head of a car, it made short work of lone travelers passing through remote mountains. Possessing great strength and a long sleek body, it is known to reside in tunnels deep within the mountains, only emerging to feed. Like a snake it senses even slight vibrations in the ground, knowing in advance when anyone was approaching. Many unsuspecting travelers have fallen prey to this monster, dragged underground and eaten alive. It’s breath is poisonous, it’s claws sharper than steel. In 1811 a local lord offered a bounty of gold to anyone who could kill the beast. Dozens of hunters and mercenaries set out to find the monster, aiming to bring back it’s head as a trophy. None of them were ever seen again. 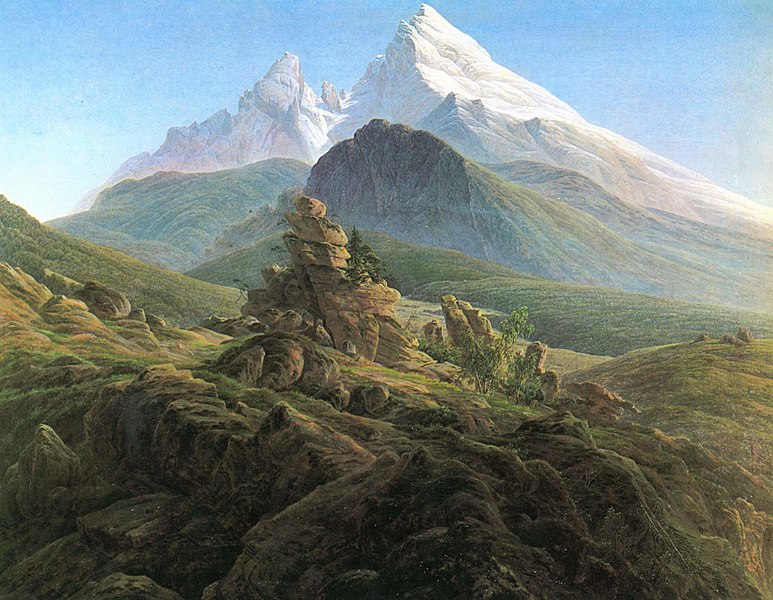 Long ago there was an evil king hated by all who knew of him. A cruel tyrant, he was corrupt and emotional, often venting his rage by abusing his subjects. For years he kidnapped, murdered, tortured, looted, as if he was deliberately causing his own people to suffer. Sometimes he would even hunt humans, chasing them down with a bow and arrow. One morning he shot dead an entire family of peasants. He enjoyed it, but it was the last straw. The Celtic gods of his tribe had long tolerated his blood lust, but this was too much. In revenge for the massacre they cursed him. The king and his family were transformed into stone. With their king now a statue, the tribe descended into civil war, soon fading from history. It is said their stone figures can still be found, somewhere in Southern Germany. 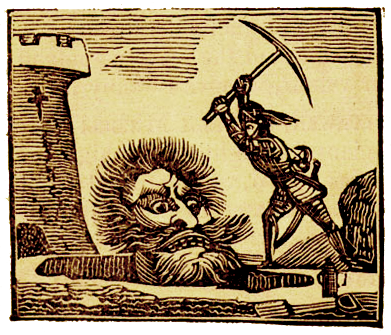 Long ago there was a great king whose castle stood atop a mountain. It was a time when Europe was still home to mythical creatures – most notably the giants who ruled over it’s northern region. Standing 50 feet tall, no human had ever been able to kill a giant. As far as people were concerned they were invincible. Then one day a particularly strong giant ventured south and demanded the kind hand over his daughter. The princess was horrified by the prospect of marrying a giant, but the king feared reprisals and agreed to the marriage.

But the day before their wedding she decided to escape, mounting a horse and riding off. The giant chased after her, screaming the whole time. He seemed to be catching up to the horse but then they reached a steep cliff edge. The horse leapt from it with great strength, clearing the gap and landing safely on the other side. But the giant was too heavy to do the same, falling to death on the rocks below. 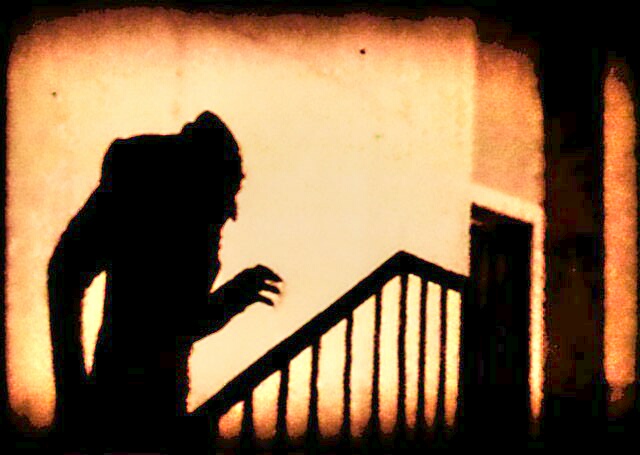 Hiding in the forests of Northern Germany can be found terrifying undead monsters. By night these hideous beings emerge to feed on human flesh. They themselves were once human. But after committing suicide, were cursed by god to forever walk the earth. Now they are driven by a constant hunger for flesh, while their own flesh rots away. The more they consume, the longer their own lifeless body will survive. And so every night they head to graveyards, burial grounds, and cemeteries – anywhere dead bodies can be found.

It is easy to recognize them, with their long fangs, the smell of their flesh rotting, and the odd grunting sound they make. But approaching them would be a mistake. The only known way to kill them is decapitation and even that doesn’t always work. To prevent a loved one from becoming like them you must remove their head before the funeral. Forget to do this and a person could well rise again. And that brings us to the end of our list, the last of all German legends.