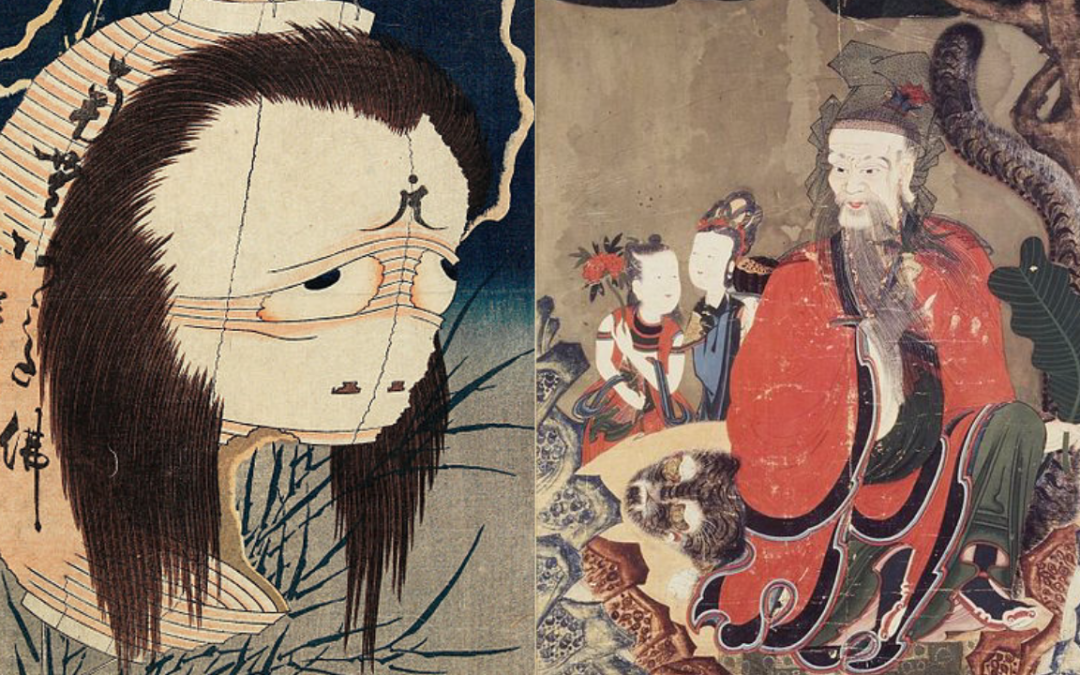 For centuries the kingdom of Korea lived an isolated existence, cut off from the world around it. After generations of inward seclusion, Korea came to be known as “the Hermit Kingdom”. Then in the early 19 hundreds she fell to the Japanese empire, ending a thousand years of independence. Since then the outside world has greatly influenced the peninsula. But you only need look to Korean folklore and mythology for signs of it’s former isolation.

Many Korean legends remain unchanged for centuries. It could be said that one of the strongest links between Koreans is that of the legends they tell, as on either side of the border can be found uniquely Korean legends. Such legends tell of dark forces, deranged killers, and horrifying creatures.

10: The Curse of General Sinui

There was once a wise old general who at the age of 80 was facing death by illness. He knew death was coming, but refused to accept this and came up with a plan to live on. After his death by illness the gods of death would emerge and remove his soul from his corpse. But the general had a way to prevent this. He pushed a silver pin into his skull, being careful to avoid his brain, believing that silver wards off evil, and would prevent them from claiming his soul.

Within the week he was dead – and as planned – the gods were unable to remove his soul. But there was one thing he failed to prepare for. Unaware of his plan to re-awaken from the dead, his children buried him. Days later he was revived, reawakening in the dark. As life came back into his limbs the general realized he was inside a coffin, trapped underground. Then he ran out of air and suffocated to death, only to soon re-awaken and suffocate again. Perhaps this torturous cycle is still continuing to this day, somewhere underground.

The streets of South Korea’s capital are known to be frequented by some kind of terrible presence. On dark nights it can be seen wandering as if it were human. From a distance, nothing seems out of the ordinary to those who encounter it. But on getting close enough, you notice she is deformed, and walking with a limp. You hear the crack of broken bone and cartilage as her head turns around.

Her blood filled eyes look directly into your soul and she asks you “where is my baby?”. In that moment you life will be in her hands. If you possess the sense to point in a different direction than her, she will wander towards it, giving you a chance to escape. But if you find yourself frozen in fear she will assume it was you who took her child. It would be a fatal mistake.

In Medieval Korea it was believed that women had a divine responsibility to marry and have children. If a woman were to die before achieving this, she would be cursed. Reduced to a form of existence between life and death, they now walk the Earth endlessly, with no hope of rest or salvation.

Driven mad by this endless fate, all they have left is envy for young women who are alive. And so they spend their days terrorizing women, haunting entire villages until all local women are driven away, so that maybe they too will die before marriage.

You will find that some Korean legends are shared with China and Russia, especially those from the border regions. At the traditional border of China and Korea is a lake within the crater of an active volcano. Now known as Heaven Lake, it has long been seen as a place of mystery and legend. But since 1903 it has been feared and avoided like never before. In that year a terrible monster emerged from the lake. Larger than an elephant, it looked like the mutated offspring of a buffalo and a seal – and for it’s size the beast moved quick.

Before being able to retreat, six locals were bitten in half by it. Surely ore would have died if a group of hunters were not there to witness the attack. IT didn’t die after being shot ten times, but did retreat back to the lake, disappearing below the surface. The incident was never explained, and from that day, people on either side of the border have been reluctant to approach the lake, worrying they would provoke the monster it contains.

Somewhere out there exist a hideous and dangerous creature known as Dokkaebi. The Dokkaebi are small but powerful, carrying around a blood stained wooden club. With that club they possess the power to summon any object to them. Dokkaebi are not evil – in fact they often try and help humans – only to find people scared away by their appearance. They are red faced, with bulging eyes, large horns, and twisted limbs.

Unable to handle this rejection they are known to sometimes resort to stalking. And after months of watching their chosen victim, beat them to death with a wooden club. However, even worse a fate is reserved for some who willingly interact with them. Dokkaebi are often followed by an outbreak of disease that moves with them, infecting the world with horrific illness as they move through it.

5: The Case of Yeongdeok House

Atop a remote hill in South Korea stands Yeongdeok house. Just outside a small fishing village, amateur ghost hunters from all over Asia come here to investigate the house for themselves. According to Korean legends, it was built on a Korean war mass grave. No one thought ill of building the house here. But in the months and years that followed, countless tragedy occurred. It began with the suicide of a young girl who lived there.

Before long her parents were also dead, as were the buildings next inhabitants. Every single person to call it home died untimely deaths. Word got out that all who enter Yeongdeok house did soon after – dissuading anyone from buying the property. And so it has been abandoned for decades, slowly falling apart. Local shaman offer the only explanation for such a long chain of tragedy: that an enormous serpent like phantom occupies the house, driving inhabitants to commit suicide.

Years ago, an outbreak of foot and mouth devastated the Korean countryside. As the disease swept through towns and villages, countless lives were put at risk. Being spread by livestock, the government resolved this by having over a million cattle put down and buried in mass graves. But it was not just cattle who met this fate. On a dark night a man passing by as remote town began to hear strange noises. It was the wailing of a stranger in distress.

In the dark he followed in the direction of such wailing until stumbling upon a mass cattle grave. The sight and stench of hundreds of decaying cattle left him dizzy, but still he continued, following the sound. Eventually the wailing stopped, leaving the man to search on in the darkness without direction. For hours he looked on until sunrise revealed his true surroundings. Now able to see clearly, he realized the corpses around him were not of cattle. It was a mass human grave.

High up in remote mountains lurk a kind of faceless spirit who wish only to be left alone. Stay clear of their mountain and no harm will come to you. But accidentally wander into their home and you will find a terrible sight. With long hair and no face, just looking into the sockets where their eyes should be can cause instant death. Anyone who looks directly at them will die. But avoid this and you’ll not yet be safe.

Faceless ghosts are known to stalk those who disturb them, following their victim wherever they go. This does not end until the victim has been driven insane, and everyone they love has been scared away. After losing everyone you care about you might willingly look at the ghost just to end the torment.

We do not know how but one in every generation of foxes survives for over a thousand years, sloswly over time becoming more than just a fox. Known as Gumiho, they now have nine tails but can easily shape shift, taking on the appearance of any living creature. Yet they are not satisfied with such a life and strongly desire to become human.

To do this they must eat the heart of one thousand men. And so, wherever the Gumiho roam a trail of bodies follow, being found the next day with a gaping hole in their chest and a missing heart. Strangely, each man died with a smile on their face, as if experiencing euphoria at the moment of death. The Gumiho has one thousand days to kill one thousand men. Fail this, and they must start again. It’s not just Korean legends that tell of the eight tailed fox. Similar stories are found in China and Japan.

Of all the ghosts of Korean folklore, none are more feared than water spirits. They are pale and dripping wet wherever they go. Having drowned to death, they are forever destined to walk the earth searching for victims to join them. Encounter a water ghost and you will be dragged back to the body of water they haunt, and held underwater until it is your grave also.

That body of water is where the ghost originally drowned – be it a lake or river or even a well. Happen upon this body of water and in a matter of seconds you could be under the surface, held down by the long arms of a water ghost.