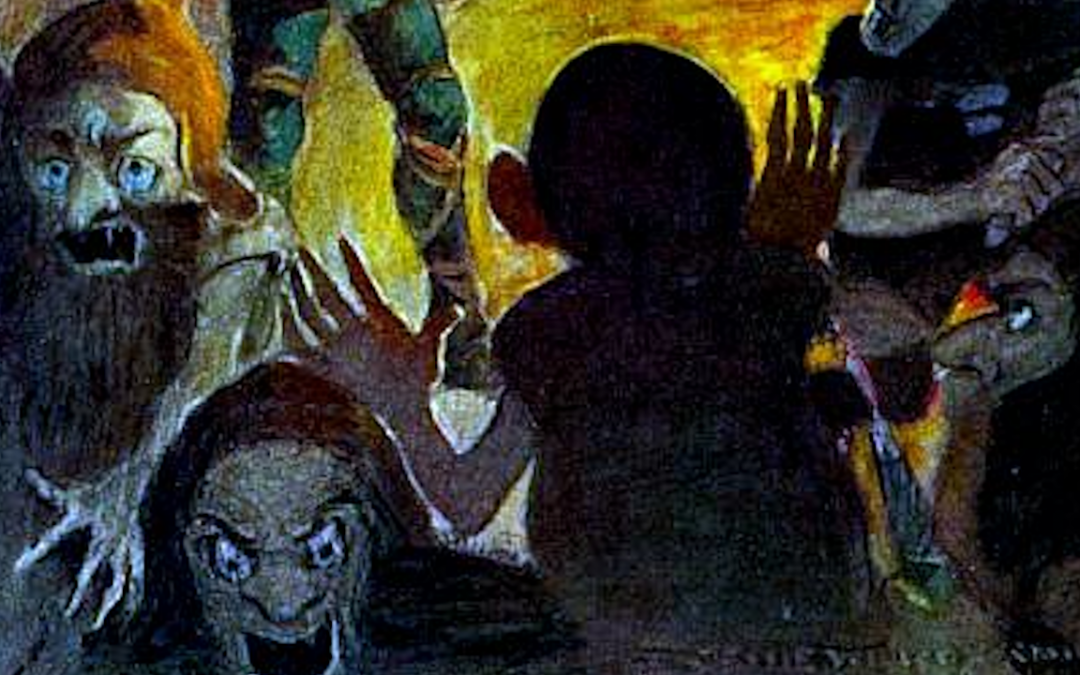 There are many dark Native American legends, telling all kinds of eerie tales. You’ve probably heard some of these. The Wendigo for example. The richness of Native American legends is no surprise. By the time Europeans arrived in the Americas, tens of millions of people already called it home. Each of them belonged to one of several thousand tribes also. How they got to the Americas or quite when it a complete mystery. With a lack of written records, the line between history and mythology is a blurry one. But it is thought much of their folklore is drawn from that mysterious origin.

For a long time the Navajo believed that studying magic could give them special powers. Use those powers for good and you will become a medicine man. But use them for evil and you will become a skin walker. Skinwalkers are human but have the ability to transform into animals. They only ever do this to kill or harm other humans, and possess an unrelenting blood lust. Skinwalkers choose their victim carefully, entering houses at night in the form of a wolf. The sleeping victim would simply never wake up. There is only one way to kill a skinwalker. You must learn their true identity. And as they are in mid transformation, pronounce their full name.

There was once a beautiful young woman. In her camp only men were allowed to hunt, with women not even able to discuss it. One day she accidentally interrupted a conversation about hunting. For this she was severely punished. Wrapped in the skin of a mountain lion, a medicine man performed the darkest of rituals on her. From that day she was a monster – half human, half mountain lion. She was cursed to forever wader the earth in that form. But the curse backfired. Soon local parents warned their children not to leave the camp at night. They knew the wampus cat was always on the prowl, her long fangs ready to kill.

Long ago a very unusual baby was born to the Arapaho tribe. The child’s mother felt no love for him but could not explain why. One night she realized the baby had awoken and left their home. Following after, she watched him enter the home of the local chief. As she stood there watching to see what her newborn baby would do, her baby murdered the chief, tearing his head from his body. Shocked by what she had seen, the mother ran away that night and was never seen again. Nobody realized it was a baby who commit this brutal crime. But the next night he emerged again and again he murdered. In a matter of months all in his village were dead.

Countless Native American legends tell of headless men, human-like figures with no head. One story tells of a blind woman who often gave lonely travelers shelter for the night. One especially cold night she allowed an elderly man into her home. He was clearly on the verge of starvation, being unable to even speak. The stranger was only able to moan in pain. She gave him food but could not hear him eat. Assuming he was simply too weak to eat, she tried to feed him but couldn’t find his mouth. Only now did she realize he was a headless man and that she would be dead by dawn.

Notorious across North America, one monster stands out among all others. Many native American legends describe a demonic cannibal known as the wendigo. With the head of a deer and a deformed body dripping with blood, the wendigo was once human. But for an unknown reason they turned to cannibalism. And as they consumed human flesh it gradually transformed them into a monster. Wendigo are at least ten feet tall, with large swollen stomachs. No matter how much they eat, Wendigo continue to starve. And so they roam wooded areas, always hunting for human victims. But like a person drinking seawater, they only get more hungry.

In one northern tribe a beautiful woman once rejected a marriage proposal. Heartbroken, the man would dedicate his life to revenge. After years of studying magic he crept into her tent and placed a snowball on the woman’s neck. The next morning she awoke different. For several days she refused to eat an food. Then suddenly she felt an overwhelming hunger for snow. Running outside, she ate snow from the ground. All day long she ate snow – her mouth and hands going numb from the cold. After days of this she begged to be put out of her misery. So she was, shot with 49 arrows.

In the great lakes region a terrible race of creatures lurk deep in the woods. Seeming to defy all logic, they are flying heads. Human skulls that miraculously float through the air at night. Some appear as nothing more than a skull, while others have half rotten flesh, wings, or even small arms. It is said they were created long ago, when a group of prisoners were decapitated, their heads thrown into a local lake. Cursed by this injustice, the heads would soon emerge from the lake.

Somewhere in the mountains of Vancouver island lives a deranged old woman. Born with a hunchback, she fled to the wilderness while still young. Perhaps she was unable to live with the bullying of other children. Decades of isolation in the mountains distorted her mind, her hatred of bullies growing ever stronger. Now she re-emerges once per year under the cover of a snowstorm. Carrying a basket on her back, she will spend days stalking local children. On finding one who seems like a bully she will stuff him into the basket and drag him away. Never to be seen again.

On a dark rainy night a woman and her two children were approached by a stranger. Requesting shelter for the night, he was allowed inside. For hours he stood in front of the fire and refused to sit down. The mother must have been very tied as she thought for a moment she could see the fire through his body. Then at midnight he turned around. He told her that just outside her tent a wealth of gold was buried. But the moment she went outside to look, she heard screaming within the tent. Running back inside, she realized the man had disappeared. And so had the eyes of her children.

Multiple native American legends have long told of a strange small creature. Little cannibals, tiny monsters no smaller than the average child yet who possess great strength. Just one of these creatures can easily kill ten grown men. But little cannibals were only ever seen in groups. They were once human. Great warriors who died in battle but were resurrected through black magic. Travelling from one region to another, they massacred entire populations and ate their corpses. They were so notorious it took an alliance of many tribes to defeat them in battle. Only then were they killed off.