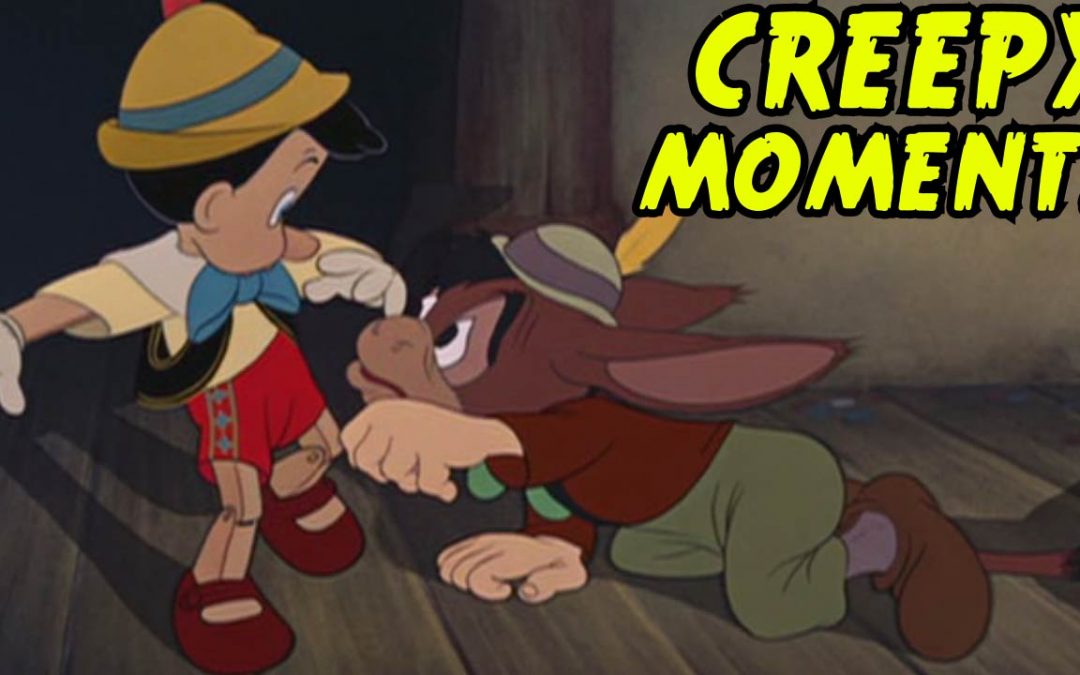 Disney films aren’t as child friendly as you might hope, which tbh should be expected considering many of them were based on fairy tales. Fairy tales are also child-focused but some of those are dark as a Norwegian winter. These Disney moments has terrified children all across the globe.

Return to Oz – Basically Every Scene

The Wizard of Oz is possibly the most whimsical movie ever. Most have watched it as children. But in 1985 a less well known sequel was released – and it’s just creepy. Here’s the plot: after escaping from a psychiatric hospital Dorothy finds herself back in Oz. But it’s been ruined by an evil witch. The land isn’t whimsical any more, just dark and disturbing. It’s difficult to pick the most disturbing moment from return to Oz. It could be when she returns to a decaying emerald city where the cowardly lion has been turned to stone and some weird creatures attack her.

There’s one scene where she meets an evil creature who has various detachable heads to wear. The evil creature expresses interest in stealing Dorothy’s head, which of course would involve murdering the girl. So Dorothy runs away as to not die. That was a good move but she really messed up later on when she returned to steal something from the creature, accidentally waking it up. The creature sleeps without a head. And so this terrifying headless humanoid chases Dorothy in a frankly ridiculous scene.

She runs past the creature’s many other heads, which are kept in glass cabinets like some kind of satanic museum. The other heads scream at Dorothy as she passes. It’s horrifying. It’s a horrifying movie aimed at children, which is why most parents refused to take their children to see it, and it was a box office flop.

I remember when I was a human child there was one movie that always scared me… but I never understood why. It’s called Fantasia and it’s a collection of short animations set to pieces of classical music. Several parts of the film scared young Eskify. One of which being the sorcerer’s apprentice, where Mickey Mouse almost dies drowning as he struggles against magically animated brooms. The evil brooms get the better of him and the wizard needs to save him from certain death. So that scene disturbed me. But the final scene disturbed me even more.

In the final scene Satan opens the gates of hell. Demons and ghouls emerge into the world. They haunt Earth for an entire night before rushing back to the underworld by dawn. As a child it made me scared of the night time, and that’s not good.

In 1959 Disney gave us the worst crisis since Suez. It’s called Darby O’Gill and the Little People. It tells the story of an old Irishman, who engages in a battle of wits with leprechauns. That sounds like a fun and innocent movie but there are moments that are just unnecessarily unnerving. As he attempts to find the leprechaun homeland it becomes apparent that an evil bansee exists and can be summoned by death or danger. When one character dies the banshee suddenly appears in it’s transparent green form and flies towards the characters. It’s only disturbing as the rest of the movie is so innocent. One minute it’s all gold and leprechauns. But before you know it, BANSHEE TIME. It’s so unexpected. #BansheeTime

When you think about it, Sleeping Beauty is a really weird film. It’s about a stupid niave young idiot who goes around touching cursed objects and falls into a deep sleep. That’s the film in a nut shell. The creepy moment is the scene where she pricks her finger on the cursed spindle. It’s just, for some reason unknown to science, terrifying to children.

This moment comes from Pinocchio. Pinocchio and Jimminy find themselves on a mysterious island. But it soon become clear that the island is cursed/ Any boy who behaves badly while on the island will be transformed into a donkey, and kept in captivity forever. When their friend is suddenly transformed into a donkey, they decide to escape from the island, just as Pinocchio begins to transform into a donkey. As his friend desperately begs for help they are forced to leave him and the other boys behind to remain as enslaved donkeys forever.
But I’ll tell you what’s even more creepy… the entire live action version of Pinocchio. Don’t watch it. You have been warned.

There’s one scene from Cinderella that creeps me out more as an adult than it did as a kid. Firstly, the mice take pity on Cenderella. They bring her some jewellery and a nice dress, so she will be ready for the ball. But her evil stepmother couldn’t stand to see her happy. She subtly manipulated the stepsisters into tearing Cinderella’s clothes off. The stepmother then taunts Cinderella before leaving her to cry alone. It’s only now as an adult that I realize how realistic a villain the stepmother is. It’s a chillingly accurate depiction of emotional abuse at the hands of a guardian. And as the film goes on Cinderella shows signs of trauma that real life victims of parental abuse often do. It’s eerie.

Beauty and the Beast – When They First Meet

I always remembered the scene from beauty and the beast where they first meet. It really is disturbing because it shows us how much of a naive idiot Belle was. She finds her father locked in a cell, when suddenly the light goes out and she meets the beast. But apparently it’s too dark for her to see him. That’s the first sign Belle isn’t exactly a genius. There’s clearly some light in that dungeon. She can tell he doesn’t have the build of a human. And there’s also his ridiculous monster voice. Still she acts all surprised when he reveals himself. She was dumb and naive, which makes the beasts possessive ownership of her even more creepy. It seems like his plan was to literally keep her captive forever as a slave. So the whole movie is essentially glorifying Stockholm syndrome.

Dumbo is a nice film apart from that one scene where he gets drunk and started hallucinating. I was always told not to drink alcohol through a straw, but Dumbo drank through his trunk, so it’s no wonder his hallucinations were so strange and vivid. He falls into a world of dancing pink elephants. They sing warnings and express concern about Dumbo for hallucinating, giving us a glimpse into the mind of a distressed young elephant.

Something Wicked This Way Comes – Faces on Hands Scene

Something Wicked This Way Comes features many dark scenes. Set in a small American town it tells f a mysterious circus, whose owner was less human than he first seems. With his freak acts he intends to take control of the town and it’s population. Just to give you an idea of the general feel of the film, it was a major influence of Stephen King. Two boys investigate the mysterious circus and find themselves in many dark situations/ The owner knows they’re onto him and so he looks for them with their images depicted on the palms of his hands.
Apart from when other children begin being executed, this scene is for sure the most creepy.

Winnie The Pooh Heffalumps And Woozles

Of all the scariest Disney moments, you might be surprised to learn the most creepy comes from Winnie the Pooh. It comes from Winnie The Pooh and the Blustery Day, which saw the Hundred Acre wood hit by some kind of storm. So Pooh had to cope with all the rain. But while doing so he falls asleep. A psychedelic nightmare takes grip of Pooh, depicting Heffalumps and Woozles – which are his worst fear. Not only do they threaten him but his honey also. Because Heffalumps and Woozles steal honey… and Pooh loves honey. So it’s no wonder Pooh is so distressed by his nightmare. It’s a terrifying scene to anyone who love hones as Pooh and I certainly do. It’s like Walt Disney had a thing for psychedelic animal dream sequences. And another thing, since when was Winnie the Pooh Disney?