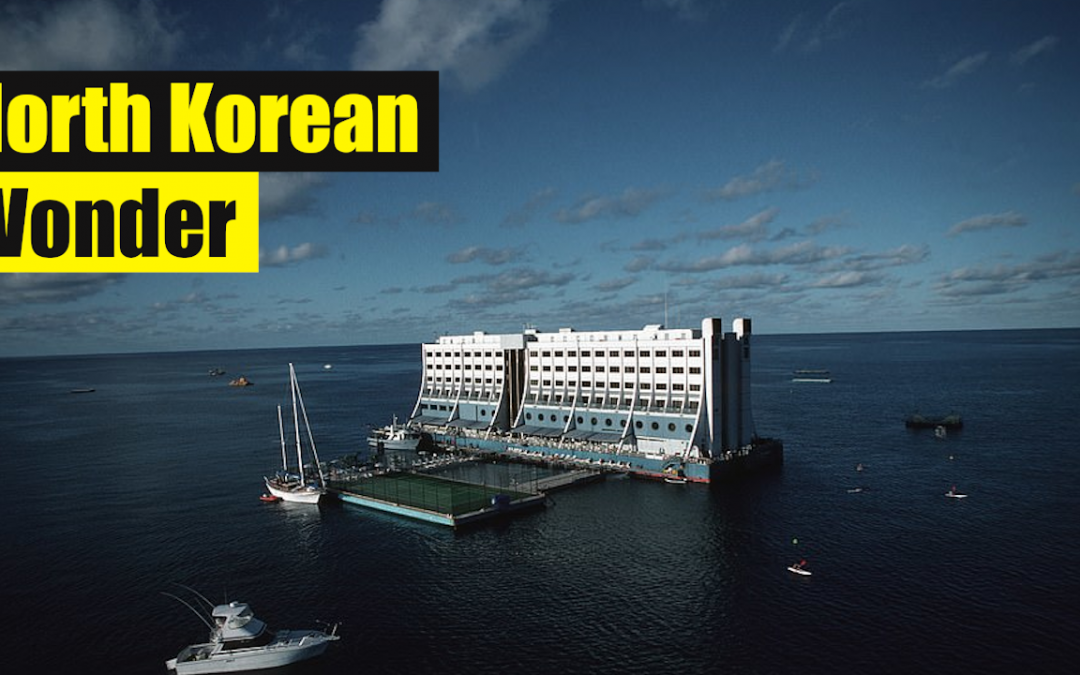 I think North Korea has a special place in all our hearts. There are several reasons why we love it. First of all it’s the only country ruled by a sex symbol. Well… apart from Serbia. But it’s also a nation full of strange and unique places. In 2015 North Korea was added to google maps. Until then little info was available, even about what physical locations could be found there. Hence why North Korea is known as the hermit kingdom. But in recent years a lot of gaps have been filled, giving us an idea of just how strange things have gotten in North Korea. Among the places identified are nuclear testing sites and ridiculously big golf courses. Yet one stands out among the others – a giant floating city built in the 1980s by an eccentric Australian. This is the story of North Korea’s floating hotel.

Rise of The Floating Hotel

In the 1980s an Australian developer had a very Australian idea. For decades he had been a professional diver and even had his own submarine. His great love was to explore natural reefs. Wanting to share the experience with others, he hoped reef tourism would become a popular trend. So he developed a series of business ventures aimed at making his dream a reality. The most important of which was a floating hotel complex. It was a simple idea. The hotel would float in the ocean just beside the great barrier reef, giving almost immediate access to guests. At first he struggled to find a design that would in any way work – after all the concept of a floating hotel is cartoonish. It’s the kind of idea a 10 year old would come up with… a 10 year old on meth.

But eventually he got in contact with a niche construction company who specialized in building living spaces for offshore oil rigs. They had never built an entire building complex before but their track record proved it could be done. The hotel was built in Singapore and cost around 40 million dollars in total. That’s more than a hundred in today’s money. Then in 1988 it was dragged across the ocean by a giant cargo ship. The hotels new home was the center of a large horse-shoe shaped reef. But it was so large it was at risk of floating off on it’s own. So seven huge anchors were used to hold it in place. And that was not the only measure in place to protect the reef. Special non toxic paint was used and all waste taken far away.

Despite the difficulty all seemed to be going well and it seemed the beginning of something great. Even I can see how a floating reef hotel would be fun – and I’m a miserable creep. News of this unique attraction spread far and wide, with guests coming from all over. But actually getting there was not easy, requiring a 70 kilometer boat journey. Heading that far out into the ocean it was often a rough trip and any bad weather could delay it. Sometimes visitors would be unable to leave the hotel. At one point a major cyclone hit the area, causing the floating hotel to temporarily shut down. It was a major blow to revenue which of course they were heavily reliant on. You might not believe this but the cost of running a floating hotel is very high.

There were 176 rooms, a nightclub, restaurants and even a research station. Regular diving trips were available, as were helicopter rides. So when revenue failed to meet expectations everyone knew the party was over. After just a year in operation the hotel was sold and towed away to a less ridiculous location.

This time it was in Vietnam and renamed hotel Saigon. It was on the banks of the Saigon river in Ho Chi Minh city. Here it found much more success, coming to be known as a permanent feature of the river. For ten years the hotel was profitable, witnessing the city undergo an economic boom. The nightclub proved to be especially popular in the 1990s but in 1997 a financial crisis swept South East Asia. Multiple economies were crippled from Indonesia to Thailand. Countless businesses went bankrupt overnight. Many construction projects were halted, half built and falling apart. Hotel Saigon was just one of thousands of businesses that ran into trouble. So it did what we all do in times of trouble… move to North Korea.

The Floating Hotel In North Korea

In 1998 it was taken to mount Kumgang – which first of all, great name. It’s a region on the North Korean border which apparently in those days was a hub of tourism. South Koreans would regularly visit the area, I suppose to see relatives cut off by the border. So the floating hotel was installed here to meet the demand and for a while it went pretty well. Countless people from both the north and south visited and it was even owned by a South Korean company. But going into the 2000s relations between the 2 Koreas went from kind of bad… to bad. So the tourism industry just disappeared. The hotel was finally closed for good in 2008 when for some reason a South Korean tourist was shot.

Ever since the hotel has been abandoned, left to fall apart and rust into the waters below. Still moored so that it does not float off on another journey, it seems a waste of something so unique. From it’s creation the floating hotel has travelled more than 8,000 miles. Singapore to the Great Barrier Reef. Vietnam to North Korea. But it seems it will not be relocated again as Kim Jong Un recently ordered it be dismantled.