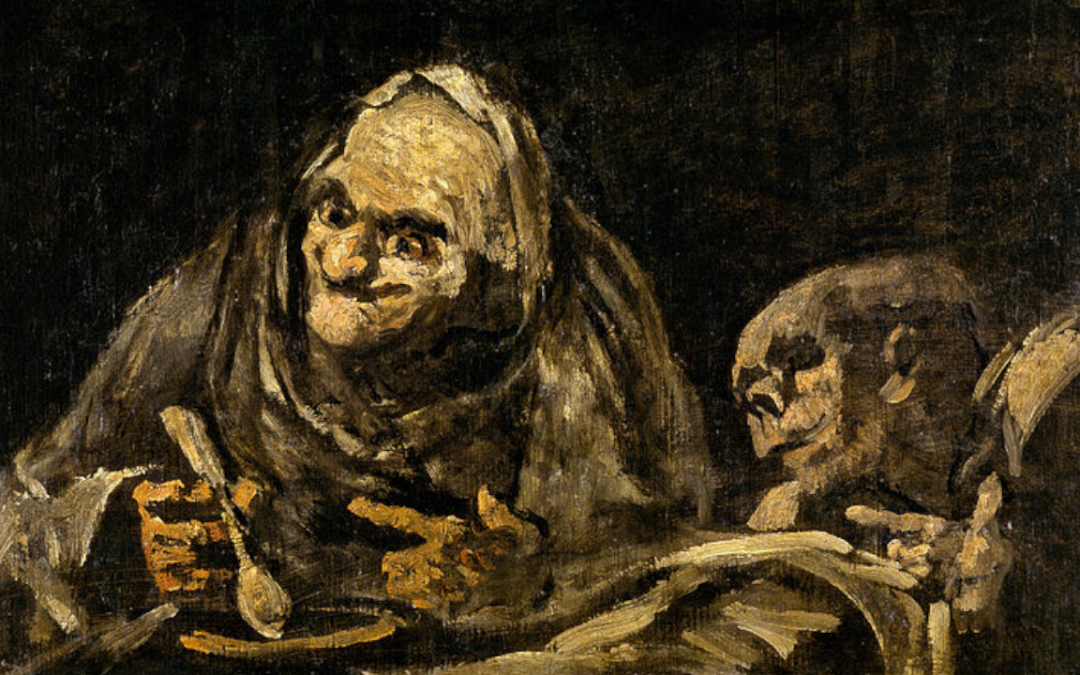 Paintings are dumb. Television is much better. But some loser actually get enjoyment from it. They’re called art collectors, which is like stamp collecting except these stamps are really big. It’s a pointless activity for idiots. And it’s not just embarrassing, it’s also dangerous. Across the world many paintings are said to be haunted or cursed. Some haunted paintings are famously so and avoided by superstitious dealers. Such haunted paintings can simply be visually disturbing or have a tragic backstory. Most are a mix of both which you will discover in this video.

This painting is said to cause the premature death of anyone who sees it. It’s even said to have caused the death not only of it’s creator but his entire family also. That creator is called Zdzislaw Beksinski. He was born in 1920s Poland, coming of age in the devastation of world war two and the desperation that followed. These horrors are clearly reflected in the paintings he created. His art is hauntingly nihalistic, often showing the human body in chaotic situations. They are never fully formed or healthy looking bodies though. Deformed to the point they barely seem human. And tragedy was not just confined to Beksinski’s art. Just when life was going well for him, his wife died in 1998. Then one year later their only son commit suicide.

In 2005 Beksinski’s own life came to an end when someone broke into his apartment and stabbed him 17 times. Still he is remembered as Poland’s first great modern artists, scaring millions of children every year with his works. While many of his paintings are just outright eerie, this sole example is said to be cursed. Could it be that in creating this artwork he doomed his own family? And that by simple showing it in my video is putting you all at risk? Let’s hope not.

The Hands Resist Him

In the year 2000 this painting was listed on eBay. Depicting a grim looking child beside a large doll, it immediately got attention online. The listing actually came with a long disclaimer, warning anybody faint of heart not to buy it. Within the disclaimer it literally said “This painting may or may not possess supernatural powers…”. That’s never a good thing to hear let’s be honest. The seller genuinely believed the painting to be haunted. They claimed to have seen the boy and doll move within the painting and even that the boy could step out of it into reality. The work itself has an interesting history. It was created some time during the 1970s and sold to the Hollywood actor John Marley. Though unclear how, it was discovered on the grounds of an abandoned brewery as if intentionally discarded.

The elderly couple who discovered the painting took it home with them but soon grew desperate to get rid of it. In time thirty thousand people would visit the listing, many of which claimed to see the painting move themselves. Most often it was reported the strange hands behind the boy were moving, clawing at the window. Some say those hands also belong to dolls – like the one standing beside him – who too has been reported to move. Perhaps the dolls want to kill the boy, hence why he is known to shift away from them. Eventually the painting was sold to just over a thousand dollars, five times the initial asking price. It’s location now is a mystery. What is known is that several people associated with the painting died shortly after coming into contact with it. 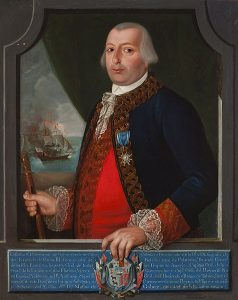 In the city of Galveston can be found an old portrait of it’s namesake, Bernardo de Galvez. Inside a hotel also bearing his name, the portrait has long been said to contain the ghost of de Galvez. All kinds of strange events are connected to it and from the opening of the hotel people have been scared of it. They say it’s eyes follow you around the room. And if you stand too close it will make you feel dizzy and cold. The most incredible rumour is that you can not take it’s photo. Any image you capture of the painting will come out blurry or distorted, as if the ghost is reluctant to be seen. But apparently if you ask the portrait politely, any photo you then take will come out clear.

Every day people come here to take a picture of the haunted paintings just to see if the rumors are true. Many leave convinced they are. 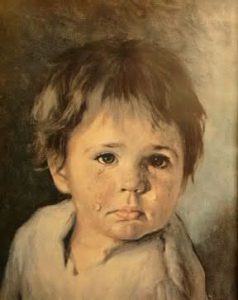 In the 1970s and 80s a series of haunted paintings were mass produced and sold across Europe. All painted by one man and depicting a young boy crying, they proved popular. In fact, fifty thousand were sold in the UK alone. Then in 1985 it got weird. Newspapers began to report on a series of fires, each at a house where a crying boy painting could be found. Firemen claimed the haunted paintings were founded in the rubble of burnt houses, but entirely unscathed as if fire proof. This was just the beginning. More houses burnt down and more paintings were discovered within them. Before long the crying boy was said to be cursed. Some said the child painted died in a fire himself, and some kind of supernatural force bonded his ghost to the image. Others claimed gypsy magic was used to create the original version.

Or that it’s creator sold his soul to the devil in exchange for commercial success. People genuinely began to fear the painting, believing it caused fires. Many painting owners were seriously injured in fires and many houses reduced to ash. Eventually a paranormal researcher claimed to have uncovered the truth. According to his story he tracked down the original painter. An old Italian man, he once knew a young boy whose parents both died in a house fire. Every family who adopted this boy died in a tragic fire, causing locals to shun him as the “Devil Boy”. Eventually the boy was chased out of town, never to be seen again. But still this painter felt sorry for the boy, immortalizing him in art. Most now doubt the validity of that story. But the paintings remain infamous, still believed by some to be cursed.