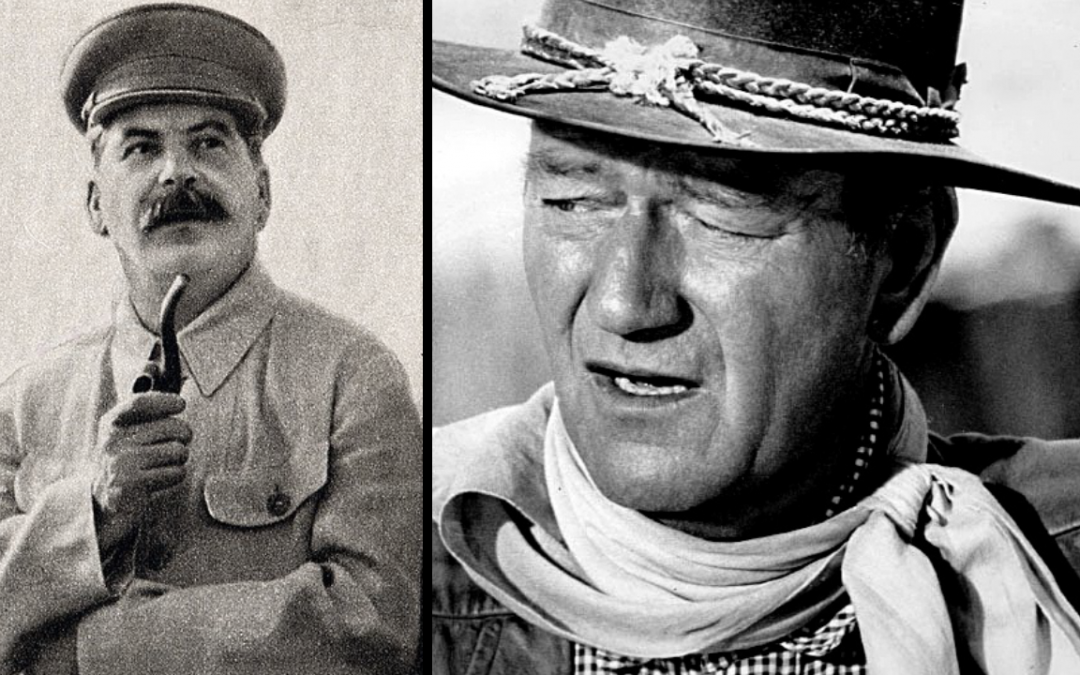 A timeless pioneer, an American icon, and perhaps the greatest sex symbol of his time. Some would attribute this description to John Wayne but it could just as easily apply to Joseph Stalin. And that’s not all these two men have in common. Another link was their love for Hollywood. Foreign films were banned in the Soviet Union from 1931 onward, yet Stalin spent countless late nights watching American movies. All of Stalin’s houses had their own private cinema. It was his main hobby… apart from being Stalin. He often “encouraged” other party leaders to enjoy it with him.

According to a key member of Stalin’s inner circle, Nikita Kruschev, he would spend much of the movie ranting about the capitalist propaganda he saw in them. And from that perspective it’s a good thing he stuck to old timey movies. There will be blood would have given him a heart attack. Despite his ideological aversion, Stalin kept ordering more movies. His favorite genre was undoubtedly the western, but even in westerns he couldn’t get over his ideological hang ups. This is the story of how Joseph Stalin once tried to kill John Wayne.

There’s nothing unusual about a dictator being a film buff. Adolf Hitler loved Charlie Chaplin to the point where he copied the guy’s mustache. Kim Jong Il wrote a book about film making, on the art of cinema. Written before Kim gained power, it’s considered the definitive work on North Korean film making. Which does sound quite prestigious, but let’s fact it who else is writing as book about North Korean cinema? No one. Kim Jong Il loved movies until the day of his death in 2011. He was just 70, a surprisingly young age for a vampire to die. Getting back to the point, a lot of dictators love movies – Joseph Stalin was no different. He was obsessed with cowboy movies, which in itself was not unusual at all. Millions of people across the globe were fans of the genre.

But there was a problem. The biggest star of westerns of that age was John Wayne – a man not afraid to criticism communism. In fact almost no one was as openly anti-communist as John Wayne. As a 6 foot 4 cowboy movie hard man, he became a powerful figure among anti-soviet activists. American politicians loved it but Stalin felt threatened. With Hollywood giving Wayne a global platform, he was actively undermining the spread of communism. From Stalin’s perspective that would not do. So he took the measured approach of ordering the KGB to kill Wayne. According to their plan, two KGB agents would go to Hollywood and assassinate him personally. But this plan would be a complete failure.

At the time, Stalin’s beloved daughter Svetlana was having an affair with a Soviet film maker more than 20 years older than her. When Stalin found out about this, he sent that film maker to a gulag. Now, forgive my strong language here but Soviet gulags were pretty annoying places. So at this point the film maker had no love for Stalin. For some reason he contacted another film maker and told him of the plan to kill John Wayne. That film maker then started telling others of the plan – because let’s face it that’s just good gossip. Before long even the FBI knew Stalin wanted John Wayne dead. Together with John Wayne they devised their own plan to trap the assassins when they did come for him.

It was on an active film set that they came for John Wayne. But the FBI were waiting, hiding in a room beside Wayne’s office. So when the KGB agents entered the office, the hiding FBI agents simply arrested them. By coincidence the assassins themselves were posing as FBI agents. This was the early 1950s, an era of great secrecy. So we know very little about what happened next. But according to rumour the assassins were too scared to head back to Russia in failure and started working for the FBI. One thing we know for sure is that John Wayne survived all Soviet attempts on his life. And it wasn’t just the Soviets who wanted him dead.

In 1966 he was in Vietnam paying visit to American soldiers, when an enemy sniper tried to shoot him dead. When captured, the world’s least effective sniper claimed that chairman Mao had a bounty on John Wayne’s head. So that’s weird. No matter how hard his enemies tried, in Asia Mexico or America, they could not kill him. But by strange twist of fate the US government would succeed where they failed.

The Death of John Wayne

In 1956, John Wayne played Genghis Khan in what is widely considered one of the worst movies ever made. That alone is bizarre. Even more bizarre is that producers chose a highly toxic filming location. That location was Snow Canyon, in Utah – a place just 150 miles from a nuclear testing site. It was chosen for it’s likeness to Mongolia’s Gobi desert. But if producers knew the devastation to come from this, they would have chosen somewhere that isn’t literally radioactive. The effects took a while to materialize. But in the decades following production many involved began to fall sick. By 1980 91 members of the 220 strong production crew had some kind of cancer. 46 of which were already dead. Among the dead was John Wayne, passing from stomach cancer in 1979.

Just two years before filming began, 11 nuclear weapons were detonated at the nearby test site. Producers knew about this but they were assured by the government that the area would be safe for filming. Ironically none of the attempts by dictators to assassinate John Wayne were remotely successful. Yet this one misjudgment by his own government is what caused his demise