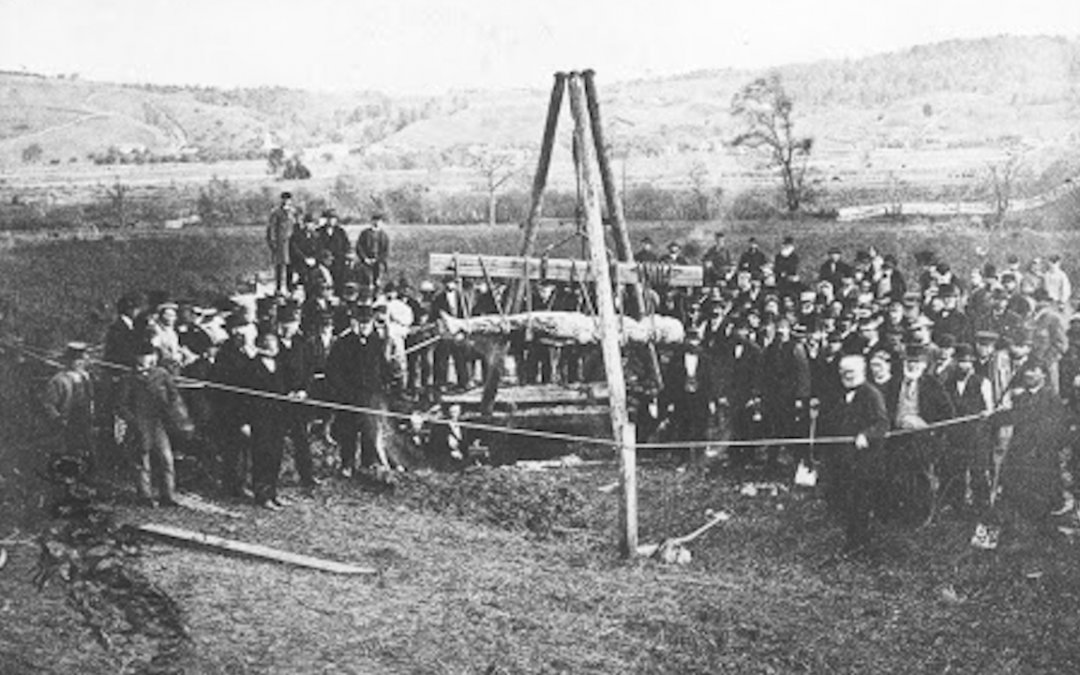 To understand the Cardiff giant we must first understand the cultural significance of giants. You can tell a lot about a culture by their folklore, by the myths and legends they tell. No matter how different cultures are they tend to have common elements in their mythology. Among the most common is an ancient belief in giants. In Mesopotamia they were called Humbaba. To the Aztecs they were known as Quinametzin. The Old Norse term for them was Jotunn. And in English we call them… big… dumb idiots. For most of modern history it has been assumed giants are purely fictional beings, stories of their existence morphing into fairy tales like Jack and the Beanstalk. Then in the 19th century a number of discoveries were made that forced society to re-asses this assumption, questioning if thee really was a time when giants walked the earth.

In 1869 a small well was being dug in upstate New York when workers uncovered something mysterious. It appeared to be a large stone foot, like the base of an ancient statue. Digging further, they unearthed an entire body, like the corpse of a human but much larger. It was ten foot tall and weighed almost three thousand pounds. But despite it’s size it seemed like a petrified human corpse/ Apparently one of the workers shouted “I declare, some old Indian has been buried here!”. Word of this bizarre discovery soon spread through the local community, the small town of Cardiff and beyond. People came from all over to see the Cardiff giant. The owner of the land it was found on was William C Newell, a small time farmer with an eye for opportunity.

Proclaiming it the preserved corpse of a real life giant, he charged visitors a small fee to see it. It was the age of oddities, with vast fortunes made by showmen exploiting bizarre discoveries. It was also an age of religious revival. Many believed that everything in the bible was literal truth. And as the bible tells that giants were once real, news of the Cardiff giant’s discovery made perfect sense. Newell charged each person 25 cent to see the specimen. In today’s money that comes to around 5 dollars, not a bad price to see a real life giant. So many came to see it Newell amassed a considerable fortune, making him and the town of Cardiff famous. Among those who came to see it were scientists and archaeologists. Initially these academics declared the corpse to be genuine.

It did look pretty old which apparently in those days was all it took. Soon the specimen was brought to the city of Syracuse, where even larger crowds were drawn, crowds so big PT Barnum himself tried to buy the giant. When his offer was refused he had a copy of it built from wax. Then he put his own giant on display, claiming it was the sole real giant and the Cardiff giant was fake. This did not go down well.

When Barnum’s giant started selling more tickets than the original, multiple other giants began to emerge. Almost every major city in America had their own version of the Cardiff giant and it got to the point no one knew which was the original. Back in Syracuse people began to question the authenticity of the giant. Many experts had dismissed it as fake, often simply by glancing at it. The newspapers who once promoted the giant as a landmark discovery now mocked it openly. Within the year the man responsible for the Cardiff giant admitted it was a hoax. He was George Hull, a tobacco salesman from New York. Nothing is more dangerous than a bored tobacco salesman, and Hull one day conceived of a cunning plan. 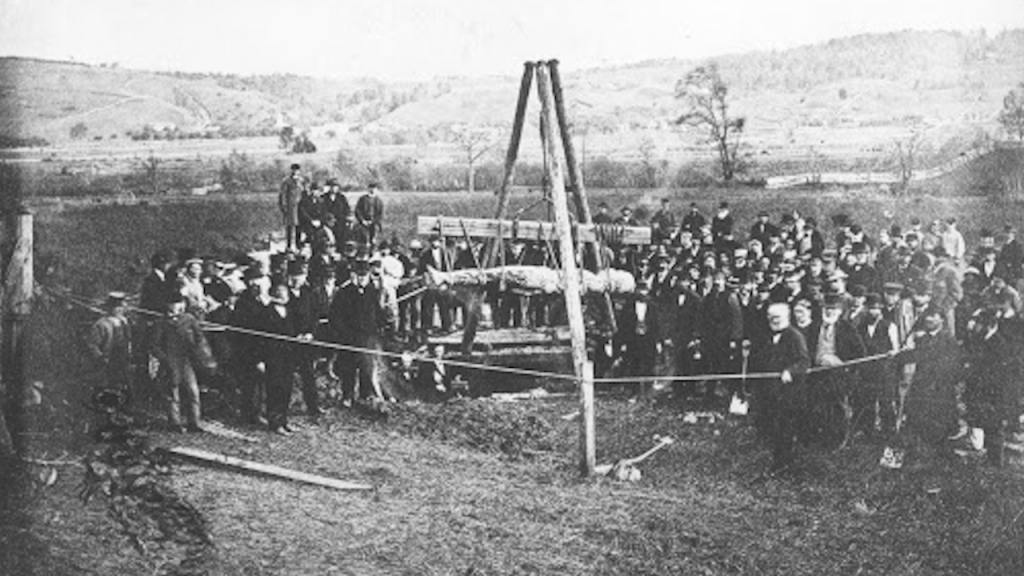 He purchased a large block of soft material called Gypsum. Gypsum has been used for sculpting since ancient times as it is strong yet flexible. Taking the block to a stone mason he had it carved into the shape of a giant man. Then over a period of months he artificially aged the Cardiff giant, beating and staining it with acid as to make it look ancient. When his ridiculous creation was complete he sent it to his cousin, the owner of a small and remote farm.

For a year the giant remained buried on the Newell farm before it’s excavation. All things considered, the amount of effort to go into this hoax was amazing. So it’s almost no wonder people believed it. By the time it was exposed as a fraud, the Cardiff giant had generated a small fortune – multiple fortunes if you consider the imitators. It would not be the last claim of a petrified giant corpse being found. In the early 1900s a sinister looking figure was unearthed in another small town.

The Devil of Scott County

Small and remote, few jobs were available in the Tennessee town of Helenwood. Most found work in the local coal mines deep underground. One day newspapers told of a bizarre artifact pulled from within the mine, the petrified corpse of a giant being. But it was unlike any corpse ever seen before: large horns on it’s head like some kind of demon. Some locals claimed it was proof a race of horned humanoids once populated the area. But even more people believed it was a sign the town was cursed. According to legend the name Helenwood is derived from a dynamite explosion that once devastated the community, causing them to call it “Hell in the woods”.

Since that explosion Helenwood had been riddled with tragedy: fortunes were lost, fathers died young, and the mines propping up it’s small economy had run dry. Now people began to question their collective misfortune, suspecting it might have something to do with the devilish corpse. Rumor told the town was cursed, and that anywhere else the giant would be taken would also become cursed. But no, it turned out to be another hoax.