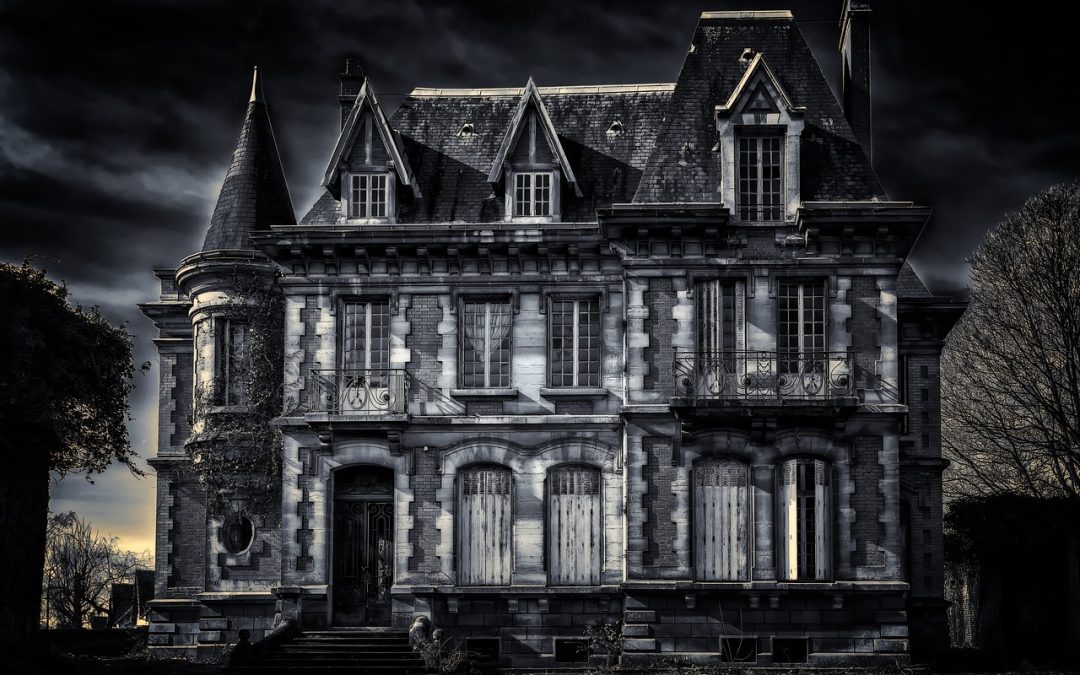 One of Ohio’s greatest urban legends can be found just east of the city of Lancaster. It is a 19th century mansion that for over a century has stood as a reminder of all that is mysterious. Generations of locals have been drawn towards and feared it in equal measure – believing it contained undead slave owners and demonic curses. This is the story of Mudhouse Mansion.

Birth of A Haunted House

It’s unknown when the mansion was built or who by. All we have are elements of historical records strung together by local folklore. According to that lore a tavern once stood where the mansion later did. It was built on a hill outside of city limits, so that tax and legal regulations could be more easily avoided. But being so remote, they didn’t get enough customers to stay in business. In the early 18 hundreds the tavern was sold to a wealthy family, who then converted it into a grand mansion. For decades this would be their home, until their own corrupt ways snuffed them out. Head of the house was a local government official who insisted on keeping slaves. But slavery was not legal in Ohio.

So to get around that he had secret chambers and rooms built within the mansion. When not needed, the slaves were kept locked inside these hidden rooms. However, most days, they would be made to work long hours in terrible conditions. Knowing that freedom lay literally just outside the walls of the mansion, one slave spent months slowly and quietly digging an escape tunnel. And then, one night, he escaped from captivity. It was the dead of night. Carefully he crept up the stairs, avoiding the creek of a single floor board, and cut the throat of his master – his master’s wife and their children. By the time their corpses were discovered the slaves were long gone. Given the lengths they went to to ensure the existence of their slaves was a secret, all authorities found were the hidden tunnels.

The bodies were swiftly buried and investigations into their murders abandoned. For many years after the house was left to fall apart. But it was not forgotten about. Before long, rumor emerged of the house being occupied by a family of ghosts – the family murdered on that cold night. It’s a ghost story that would live on into the 21st century. Many have called the mansion home since it’s original inhabitants were killed. The next family to move in didn’t last nearly as long.

It had been years since the previous incident but memory of it was burned into the collective unconsciousness locally. On moving into the mansion the new family were never seen outside. Locals assumed they were just private people. But after the front door first closed behind them, no one had seen them. Some claimed to see human figures covered in white moving around on the upper floor. It was said the secretive family were members of the Klan, and used their grand home for meetings. But this explanation was only accepted by crazy people. After six months of silence authorities entered Mudhouse mansion. Inside they were confronted by a terrible scene.

The ground floor seemed as if she had been untouched in months, decaying and covered in dust. But on the upper floor they found the entire family hanging dead. All dressed in white, it appeared they had taken their own lives simultaneously. Nobody could understand why this family would end their lives on the day of moving into a new home The truth is, nobody wanted to find out. Parent forbade their children from going near Mudhouse mansion, fearing that anyone to spend a night there will be driven to suicide. It all fed into the original story. That the ghostly slave owners never passed on to the next life. They instead haunt Mudhouse mansion, causing the death of anyone who tries to move into their home.

The legend alone was enough to deter most from even dreaming of entering it. Since it first emerged, countless passers by have claimed to see pale figures moving slowly on the upper floor. It’s not unknown for people in surrounding areas to make the same claim today. In 1930 Mudhouse Mansion came into the ownership of the Mast family – who have held it ever since. They chose not to regularly occupy it, instead leaving the building to simply fall apart. Perhaps they knew what evil lay inside. They had a strict anti trespassing policy. But due to the remoteness of Mudhouse mansion, there was little they could do to stop it. At times the home was lived in by hobos and criminals on the run.

In the 1960s, stories circulated of a group of Satanists meeting there. By night the group would enter the mansion and perform rituals to the devil. When word got out they had sacrificed a human baby, an angry mob set fire to the mansion, hoping the group was inside and would be burned alive. One version of the story told that the rumor was false, and the group were really just misunderstood hippies. I suppose burning hippies to death was America’s national pass time in the 1960s… it wasn’t baseball let’s face it. Over time Mudhouse Mansion became known as a popular destination for urban explorers, being an abandoned Victorian eras mansion and a sight of interest for paranormal investigators.

Local teenagers would challenge each other to spend a night in the mansion, knowing the legend foretold the death of anyone who did. It got to the point where the Mast family started prosecuting everyone known to have entered the house. Having been abandoned for decades, Mudhouse mansion was literally falling apart going into the current century. It was a hazardous place, posing a real threat to anyone ridiculous enough to enter it. So in 2015 the Mast family had Mudhouse Mansion demolished. Ostensibly this was to eliminate the possibility of a trespasser being injured while inside, which might in theory have made the family liable for damages. But there are people who give another explanation. They claim the legends are real, and the family knew that some kind of darkness lay inside. And so, after decades of deliberation, they decided to eradicate the problem.

Some were made sad by the loss of this ghostly landmark, others were glad to see it go. But no one forgot about Mudhouse Mansion. People still came from all over to visit the hill it once stood on. But all they find is rubble. There are so many legends about the mansion that this video could be hours long. One of the strangest tells that it was the childhood home of Bloody Mary – the murderous ghost who appears before those who repeat her name three times. But like almost every other detail of the mansion’s history, it is little more than rumor and speculation.