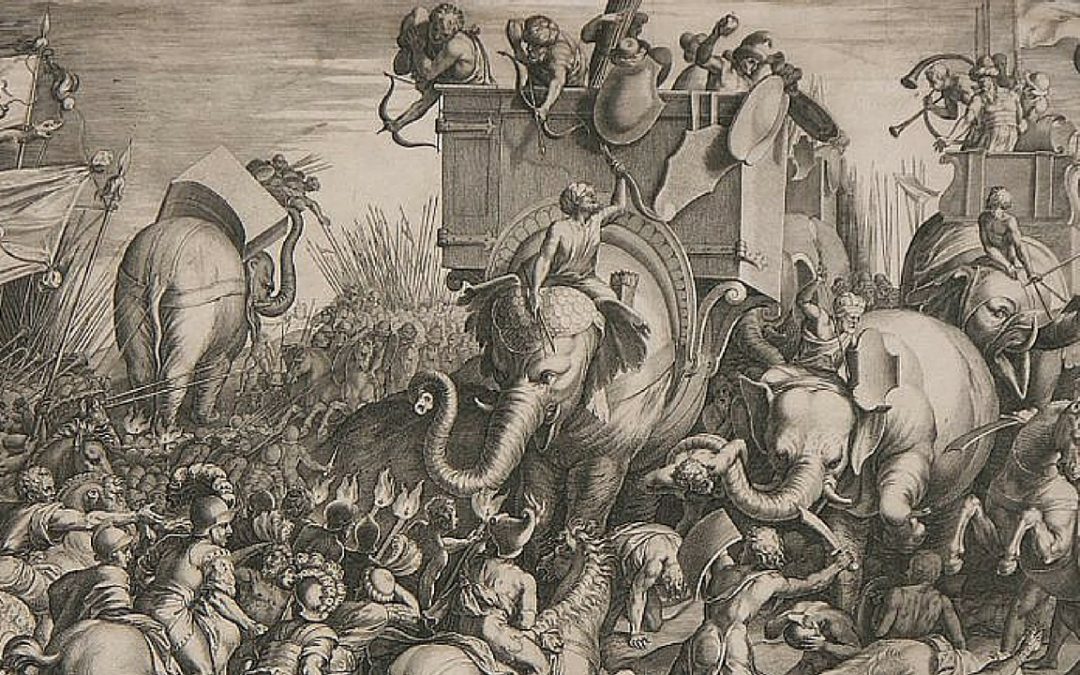 The Roman Empire was one of the greatest Empires in history, and it took hundreds of epic roman battles to get there. Rome was so powerful it didn’t have many rivals who could stand up to them, but when they found someone who could the battles were not easily won. This list includes the 10 greatest Roman battles in history, including their greatest victories, and defeats. Rome had some of the greatest battle tactics of it’s time, and some of the brutal generals.

The Battle of the Trebia 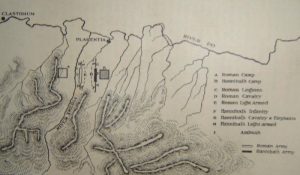 This was one of the bloodiest Roman battles against the military genius Hannibal Barca. Hannibal came from a family strategists and knew exactly how to win a battle. His opponent Tiberius Sempronius Longus on the other hand was impetuous and short sighted. Tiberius underestimated his enemy and fell directly into his trap. Hannibal was waiting ready at the opposite side of the Trebia river. Through his spies Hannibal was aware of his opponents impetuous nature, and goaded him into marching across the frozen river. The Romans could barely fight because of the cold, and Hannibal’s brother had set an ambush to cut off their escape. The Roman’s lost up to 32,000 men, and Hannibal only lost 4,000, it was a complete and utter defeat for the Romans.

The Battle of Lake Trasimene

This was the largest ambush in military history. Again Roman forces suffered a terrible defeat against Hannibal. The Roman army marched along the edge of Lake Trasimene. The Roman vanguard was cleverly drawn away by a small skirmish force of Hannibal’s. Hannibal had lured the Roman army into the right spot and marched his hidden army towards the enemy. Hidden by trees and fog, the Romans never saw him coming. The Roman’s had no chance, and with no way to escape, many Romans ran into the Lake behind them and drowned to death. The Romans lost half it’s army, with 15,000 casualties. Hannibal lost a tiny portion of his army, only 2,500 men.

The Battle of Cannae 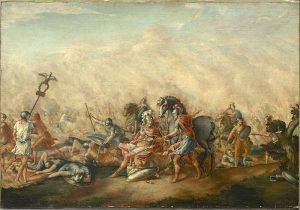 This Roman battle was the greatest Roman defeat in history. The Romans, sick of losing to Hannibal, mustered a giant army, 86,000 strong. They completely outnumbered Hannibal and yet still oat in what is considered one of the greatest tactical feats in military history. The Romans were confident they couldn’t lose, and decided to fight Hannibal at Cannae. The Romans massed their heavy infantry into a deeper formation than usual and Hannibal used the double-envelopment tactic. The Romans pushed forward and Hannibal lowly retreated his men from the middle, it have appeared Hannibal was losing but he was actually encircling the larger force. After his cavalry and reserve infantry attacked Rome from the back they were completely slaughtered. 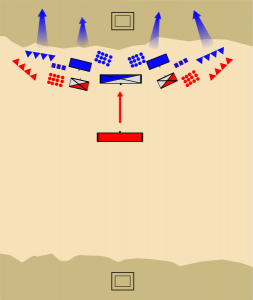 This was a much needed victory for the Romans. This was probably Scipio Africanus’s greatest victory. Scipio had always used the same formation and so when he took the Carthage forces by surprise they didn’t have much time to think and assumed he would still be using the same formation. The Carthaginian arranged their troops to combat the normal formation but were taken by surprise to see his formation had been reversed. The Carthaginians were completely outsmarted, they were fighting a losing battle, they hadn’t eaten which made it harder to fight, and were being trampled by their own elephants. Even though Rome started off with a minority of men, Rome lost 7,000 where as Carthage lost 48,500 troops.

The Battle of Utica 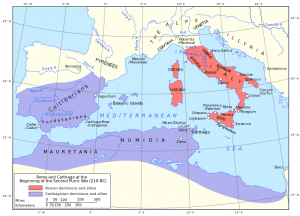 Scipio attacked the city of Utica and planned to make it into a base of operations. His first attack was repulsed and his next one failed completely. His opponents had the advantage in numbers, and Scipio was forced to retreat. Scipio then entered Peace negotiations with the city but it amounted to nothing. He then decided to place troops in an area that would make enemy army thing he was preparing fro another siege when in actuality he was preparing a surprise attack on the enemy camps. He burned down their camps, and secured victory. This Roman Battle was a decisive victory for Scipio.

The Battle of Zama 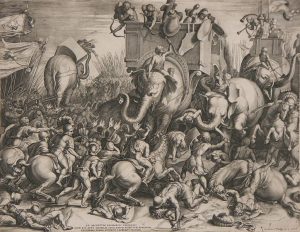 The Battle of Zama was a crushing defeat for Hannibal and finally put an end to the 17 year war they had fought. Hannibal had a larger army but Scipio had discovered a way to the Carthaginian war elephants to his advantage. Hannibal sent his elephants forward to try ad break the enemy lines. Scipio ordered his cavalry to blow horns loudly to scare the elephants and cause them to panic. This worked and sent the elephants charging back the other way and completely destroyed the Carthaginian left wing. Scipio steadily routed the enemy army until they were completely defeated. This was the final Roman battle with Carthage. Carthage sued for peace, which they were given but under humiliating terms.

The Battle of Pydna

The battle of Pydna is the battle that put an end to the legacy of Alexander the Great. The antigonid King Perseus of Macedon was a descendent of Alexander the great. Rome was outnumbered, and had trouble going up against the enemy Phalanx. The romans used a planned retreat to force the enemy Phalanx on different ground. The enemy phalanx had to disrupt their formation on the ground, and were defeated. Perseus lost half his men and was taken as a prisoner of war.

The Siege of Alesia 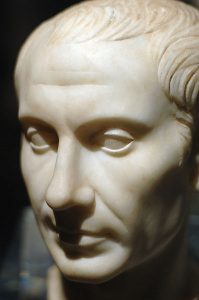 The Roman battle of Alesia was a decisive victory for Julius Caesar. Caesar commanded an army of 60,000 and defeated an army of Gallic tribes that could have been as large as 330,000 men. The Gallic tribes were led by Vercingetorix commius of the Arverni. It was the last major battle between the Gauls and the Romans. This battle marked the end of Gallic independence in France and Belgium. The location isn’t known exactly, the best guess is Mont Auxois, in France, but this strangely doesn’t match Caesars description of the battle. Caesar was completely surrounded and it looked as he was about to be defeated. He then quickly ordered the bulk of his cavalry to attack the enemy relief cavalry, after succeeding in this Vercingetorix surrendered to Rome.

The Battle of Pharsalus 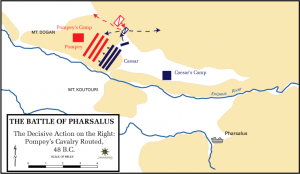 This Roman battle was an important victory for Caesar in his civil war against the Roman Republic. Caesar fought against Pompey the Great, who had a much larger force, and a dangerous advantage against Caesar. The battle went on for months, which Caesar’s position only getting worse. Pompey wanted the fight to go on for as long as possible knowing Caesar would eventually run out of food supplies and surrender. Pompey however caved into the pressure of senators who wanted him to go into battle, and was completely defeated by Caesar. Caesar routed the enemies cavalry with a hidden detachment throwing javelins. When his cavalry was destroyed Pompey was forced to surrender.

The Battle of the Teutoburg Forest 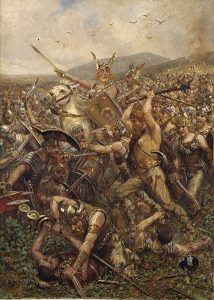 At Teutoberg forest three Roman legions were attacked and defeated by an alliance of Germanic tribes utilising guerrilla warfare. This was one of the major battles during the history of the Roman-Germanic wars. The alliance was led by Publius Quinctilius Varus. Publius was a roman citizen and had Roman education. Due to his knowledge of Roman military tactics it was easier for him to trick them, and anticipate their responses. Of all the Roman battles this may have been their greatest defeat, and many historians describe it as one of the most decisive battles in history.