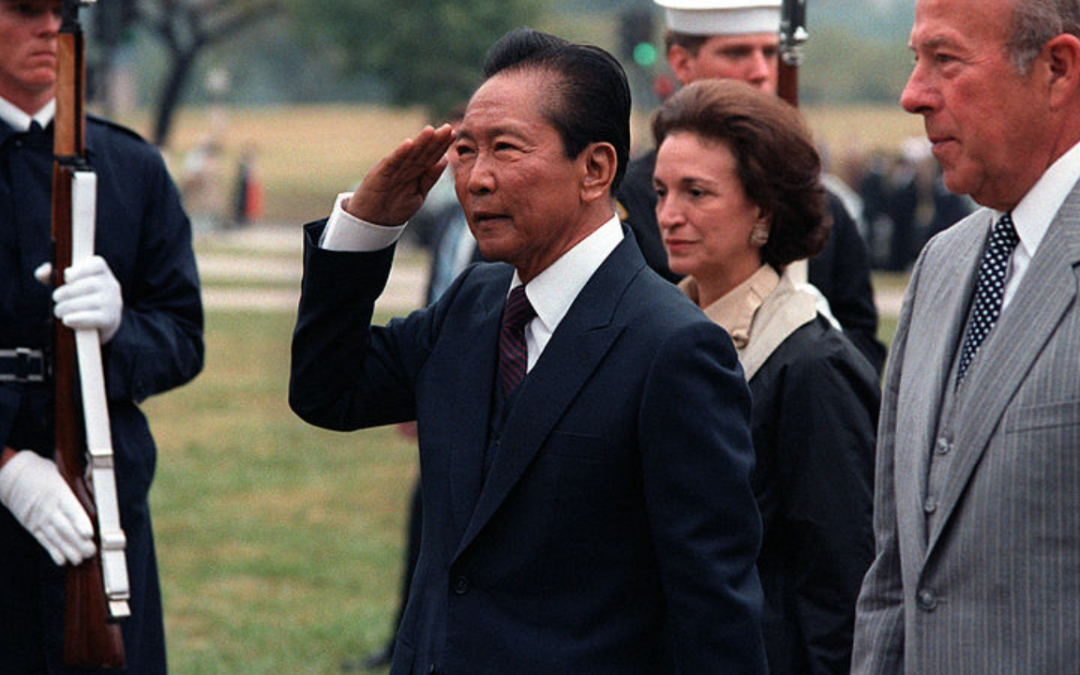 Some of the most famous figures from history were brutal dictators, but others are much less well known today. Some dictators have been able to somehow fly under the radar. So I thought it might be fun to make a video about dictators you’ve never heard of. Here are ten crazy dictators you might not be aware of.

This man has a name I can’t pronounce. I’ve tried and failed. Luckily he’s also known as “The Stalin of Mongolia”. Like Stalin, he crafted a huge cult of personality and arranged the purges of his political rivals. He also had a lot of medals. I mean look at him here, the man was a stud. Until 1921 Mongolia was part of China. But then the Mongolian communist party led a revolution with help from the Soviet Union. He rose to power in the chaos that followed.

He gained absolute power in 1939 and kept it by modelling himself on Joseph Stalin. But he eventually fell out with Stalin. Khorloogiin Choibalsan’s ultimate dream was always to unite all the land traditionally seen as Mongolia. But as some of that land was in Russia and China, Stalin refused to support this ambition and they stopped being friends. Since his death in 1952 no one person has held full control of Mongolia.

Robert Mugabe was the dictator of Zimbabwe until just last year – but before him was Ian Smith, a man with the appearance and name of a history teacher. He ruled between 1964 and 1979, when the country was still called Rhodesia. Smith established an apartheid system within the country, much like the one in South Africa. But this caused uprisings by black militant groups. The militants were backed by communist countries.

After 15 years of war Ian Smith was getting desperate. His government was isolated and had no relations with most other countries. In fact the UN urged other nations not to recognise the regime, calling it too racist. That was in 1965. If you’re considered too racist in 1965 something has gone VERY wrong. Eventually Ian Smith agreed to share power with Robert Mugabe, seeing him as a safer option than the militant groups. This was a mistake. It enabled Mugabe to then seize absolute power in the country. Ian Smith would spend the rest of his life complaining about Mugabe as if he had no part in the affair.

Türkmenbaşy was the ruler of Turkmenistan until his death in 2006. He might not have been as sexy as Kim Jong Un but he was just as crazy. He renamed the month of April after his mother, as well as the word for bread. So in a sense, millions of people ate his mother on a daily basis. He didn’t want people reading any books other than the Quran and the one he wrote. So he shut down libraries across the country. In fact he renamed the month of September after his book.

He had an ice rink built in the desert as well as a golden statue of himself that slowly rotates so that it always faces the sun. He outlawed ballet and opera, which to be honest I’m in support of. If I had my way the whole world would follow suit. He did so many weird things that I’m struggling over which ones I should include here. He doesn’t like dogs so he banned them from the capital city.

François Duvalier was president of Haiti, a country that in recent years has given the world some of it’s most crazy dictators of all time. It was during this time that Haiti became the world’s poorest country. Duvalier was a greedy tyrant, sucking his country of wealth so that he could live in luxury while others knew only misery. But it was okay because he was also hilarious.

A superstitious man, he at one point believed a political opponent of his had transformed himself into a black dog. So Duvalier ordered the extermination of all black dogs in Haiti. He was a practitioner of voodoo and declared himself to be a god. But he was the most cowardly god ever, only feeling safe to leave his palace one day of each month: the 22nd. He believed there was something magical about the number 22 for some reason. The rest of the time he lived as a recluse within his palace.

Jorge Rafael Videla was the president of Argentina until 1981. He ran a military dictatorship and, honestly, he seems like a fictional dictator from an old comedy film. As well as making thousands of political opponents disappear and protecting nazi war criminals on the run, he systematically kidnapped babies. In fact he was eventually given a 50 year prison sentence for kidnapping thousands of babies. His regime was also notorious for it’s execution methods, sometimes throwing people out of helicopters into the ocean. Thankfully his government would soon collapse. This came around the same time Argentina lost the Falklands war. People lost confidence in the military. As it was a military dictatorship the regime was doomed. He and other military leaders were famously put on trial in 1985. Videla died in prison 28 years later.

Equatorial Guinea is an interesting place, being the only African country to speak Spanish. For about ten years it was ruled by a lunatic called Francisco Nguema. As the dying Spanish empire gave up control of the country they installed him as ruler, hoping he would be sympathetic to them. But he was too crazy for that. He instead encouraged vigilante mobs to attack any Spanish people who remained. He also killed or exiled one third of all people in the entire country. Many died in forced labor ordered by him. Or starved to death as their leader was so bad with the economy. He shut down the country’s central bank and kept much of the money he found there under his bed. Nguema even abolished education. The guy was such a crazy dick that his own nephew deposed him and almost no one objected.

Than Shwe was just one of the multiple insane dictators of Burma, now called Myanmar. Ruling from 1992 to 2011, he really made a mess of things. Often his descisions were made based on the advice of soothsayers and fortune tellers. So things got pretty wild until he suddenly gave up power in 2011 for some unclear reason. He’s 85 now – or 83. It’s unclear how old he really is. And he just lives in Myanmar as a sort of… retired dictator.

Porfirio Diaz ruled Mexico for 35 years. He was a general who took power in 1884 with a military coup. Diaz wanted to lift Mexico out of poverty, allowing foreigners to buy land and institutions. But this only benefited a small number of Mexicans. American investors bought so much Mexican land that Porfirio Diaz came to be known as “The man who sold Mexico”. This didn’t go down well as most of his citizens were living in extreme poverty.

As the wealth of his supporters grew, and most others continued to starve, the government grew less popular until the outbreak of the Mexican revolution in 1910. Within the year he was forced to resign by rebels supported by America. That’s a bit strange considering he was a complete doormat for American interest. Porfirio Diaz’s overthrow was just the start of the revolution. It would last another nine years. In fact one of the reasons Mexico remained neutral in world war one is that the country was still busy with the revolution. It might seem unfair to list him among supposedly crazy dictators but he had a crazy side of his own.

Ferdinand Marcos ruled the Philippines between 1965 and 1986. He did this by claiming the country was under threat from communist rebels and declared marshal law. In complete control, he then simply refused to step down as president. Marcos’ opponents were tortured and executed regularly. This was largely overlooked. But when his main political opponent was mysteriously assassinated it sparked a revolution. Marcos was forced to flee the country with his family. It was a non violent uprising but still Ferdinand Marcos ran away to Hawaii. That’s where I’d go if I were an exiled dictator. He died two years later but his wife is still alive, as is their son, Bongbong.

They really called their son Bongbong – and that’s not even the strangest thing they’ve ever done. At one point they almost accidentally killed the Beatles. It was 1966 and the Beatles had just landed in the Philippines. Ferdinand’s wife Imelda Marcos really wanted to meet them. But tired from a long flight, they snubbed her. This was a mistake. The security guards protecting them mysteriously disappeared. When word got out they had insulted the beloved first lady, angry mobs descended on the group. They were forced to flee the country and subsequently banned from entering it.

Crazy dictators always dream of becoming some kind of hereditary monarch, but only a handful have been insane enough to actually do it. Forty years ago Jean Bedel Bokassa was declared emperor of the Central African Republic, despite it not actually being an empire. He had a cartoonishly large throne built and was crowned in a ceremony modeled on Napoleon’s coronation. The ceremony cost the entire countries GDP for that year.

From then on he would be known as Emperor Bokassa. But before that he had been known as “the cannibal dictator”.Through his 13 years in power there were rumors of him cannibalizing the flesh of his dead political opponents. It’s unclear if this is true but we know he had 100 school children executed because he didn’t like their uniforms. Bokassa was eventually overthrown by French military intervention in 1979. Imagine being too crazy for the French.