The Sack Of Rome By Barbarians 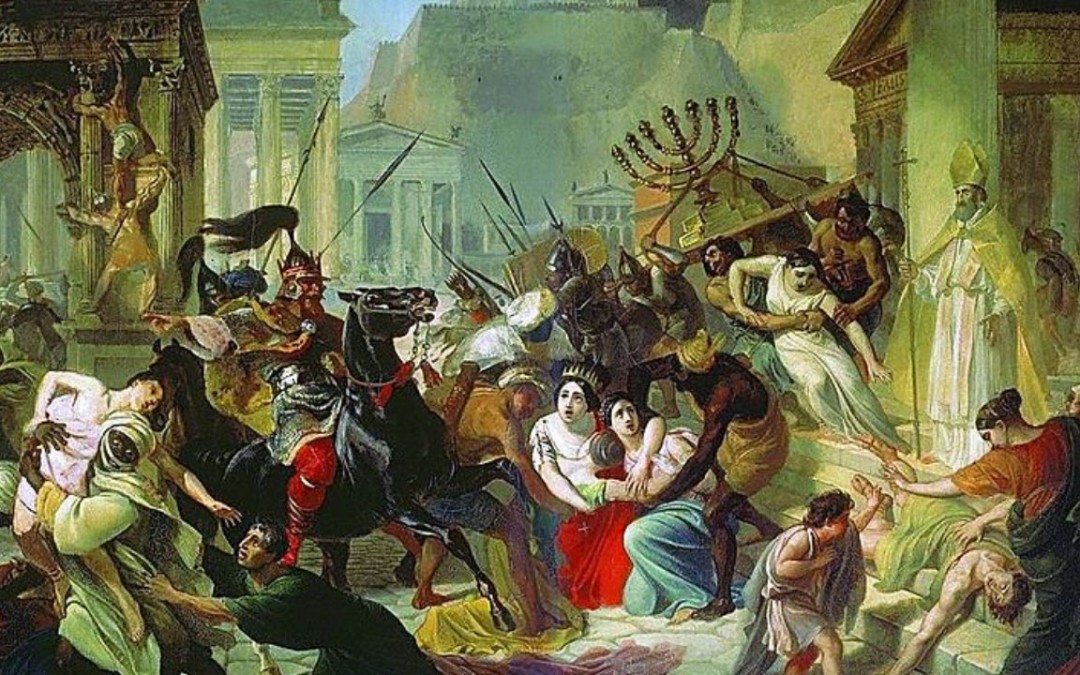 There have been 4 Major sacks or Rome. Sacking is the act of pillaging a city or large settlement; it tends to involve a lot of murder and mayhem. In this article we will look at each of the major sacks of Rome.

On the 24th of August 410, the Visigoths rushed into the ancient city and began pillaging. This was the first time that Rome fell in 800 years, and it came as a shock to all in the known world. Up until this point, the Visigoths were allies of the Roman empire – their land was under Roman control and their men served militarily in defence of Rome. But the Visigoths were sick of not owning land and decided to fight for it. This decision led to over a decade of war with the Empie and 3 attempts to invade Rome. Their third attempt was a success – it was the sack of Rome. Rome was the largest and most wealthy city in the world, making it the ideal candidate for sacking. The city gate was opened to them – legend says it was opened by Roman soldiers who wanted to play a part in the sack of Rome. The city was absolutely devastated in the chaos of it. Most important buildings were ransacked and they stole everything they would carry away with them. Which included a 2 thousand pound silver vessel! They even managed to capture the Emperors own sister.

After 3 long days of mayhem, the Visigoth swiftly fled from the city. By this time they had basically already taken everything possible. The Visigoth king died from an unknown illness later that year. They say he was buried with his share of the loot and that everyone who knew the location of his grave was murdered. The Visigoths went on to join forces with other barbarian groups in the fight against the Romans. The 410 sack is considered a major event in the long road leading to the fall of the Roman Empire.

On the 2nd of June 455, the vandals began a brutal 14 day sack of Rome. In 442 AD, the Vandals signed a peace treaty with the Romans. But in 455 AD the Vandal king was assassinated and a new king was crowned. The new king was anti-imperial. He declared that they were no longer bound by the peace treaty – and marched his army towards Rome. The pope actually allowed them to enter the city – but only on the condition that they not damage the old district of Rome. The Emperor knew the Vandals were too strong for him to resist so he just ran away. In the act of fleeing the city he was killed by an angry crowd. So at this point, the Vandals were inside rome with no one to resist them and no Emperor. Their sack was a lot more intense and deadly that that on 410 – it was 14 days of destruction of property and outright looting. Countless boatloads of slaves were captured in Rome and shipped across the Mediterranean.

On the 17th of December 546, Rome was breached by hoards of Gothic barbarians. It was during the Gothic war when the Gothic king was determined to conquer Italy. With this in mind he moved his forces towards Rome. On reaching the city, a year-long siege began with no excitement. They immediately denied any civilians to leave the city and set up camp. Their goal was to starve the city of supplies until a successful beach was guaranteed. The pope sent supply ships to Rome to feed it’s starving population but the Goths captured them before they reached the city. On the 17th of December, it was decided that the time was finally right for the advance. Gothic soldiers scaled the city walls in the dark of night and opened the main gate. By this time there were as few as 500 people left alive in Rome, none of which capable of defending themselves. The goths loaded their horses with loot and destroyed one third of the cities defences.

The Normans are known for their surprisingly successful invasion of England. But they surprised the world just as much when they sacked Rome in June of 1084 AD. After besieging the Pope’s stronghold, they sacked the city for 3 long days. They spent their time doing the usual things: fighting, stealing, and vandalising. After 3 days the population of Rome rose up and drove back the Normans. The Normans started setting fire to everything which distracted the locals until the Normans retook the city.

In 1527, a group of 34 thousand German soldiers commit mutiny. They forced their commanding officer to bring them to Rome. Rome was a bloody wealthy city which was very poorly defended; so to a deserter army it was a sitting duck. As they marched across Europe, many other deserters from different armies joined them. It must have seemed like everyone wanted a piece of Rome. On May the 5th, they reached the city to find it was only defended by around 5 thousand soldiers. The next day they advanced on the city. Only 42 of the Swiss guard avoided being slaughtered – they escaped through a secret passage along with the Pope. The sack of Rome didn’t soon get any less scary. One thousand people were slaughtered for getting in the way of the soldiers and holy sites that needed destroying for some reason. Past victims of Catholic persecution flooded towards the city from all over Europe in search of revenge. Many of them got it. In June, they captured the Pope, who paid a small fortune to avoid losing his life.

The sack of Rome weakened the diplomatic position of the German empire. Being unable to stop his own soldiers from destroying the most holy relics in Europe didn’t go down well. It is an event remembered even today. Every year, Swiss guards are sworn in on the 6th of May to show respect for those who died defending the city on this day all those years ago.